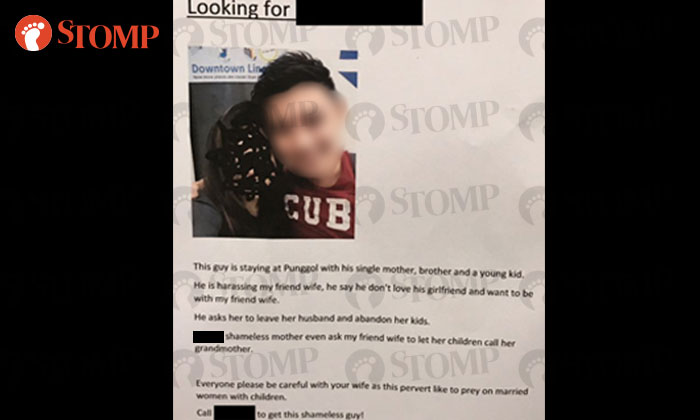 A poster accusing a man of harassing a married woman has been spotted on the walls of several void decks in Punggol.

Stomper Desmond took several photos of the posters and sent them to Stomp.

The posters in Desmond’s photos not only showed the man’s face, but also his full name, and handphone number.

“This guy is staying at Punggol with his single mother, brother and a young kid.

“He is harassing my friend’s wife.

“He says he doesn't love his girlfriend and wants to be with my friend’s wife.

“He asked her to leave her husband and abandon her kids.

“His shameless mother even asked my friend’s wife to let her children call her grandmother.

“Everyone, please be careful with your wives as this pervert like to prey on married women with children.”

A resident, Mr Chen, 39, told Shin Min Daily News that he came across one of the posters at the void deck of Block 274C, Punggol Place at around 7pm.

“I have three young children.

“We were passing by when my son told me about the poster on the wall.

“I did not let him know about the content of the poster.

“But to display the person’s photo, and place up such controversial content can set a bad example for kids.”

It is understood that the posters were put up at the void decks of four Housing and Development Board (HDB) blocks in the area.

When reporters visited the blocks, they found that the posters at three of the blocks have been removed, leaving only an intact poster at last block.

Reporters contacted the man in the poster after that, and he refuted the accusations on the posters.

He said that the accusations were completely untrue, and this was an act of defamation.

The man also added that he lodged a police report, and was advised to bring the matters up to the Magistrate Court.

He was unwilling to publicise the matter further as he did not wish to bring inconvenience to his family.

Related Stories
Woman lodges police report after getting listed as escort on adult website
Flooring company owner offers $500 reward to track down alleged cyber bully who accused him of having affair and called him names
Rescued dog reunites with owner who was falsely accused of abusing and abandoning it
More About:
defame
harassment
punggol
cheating