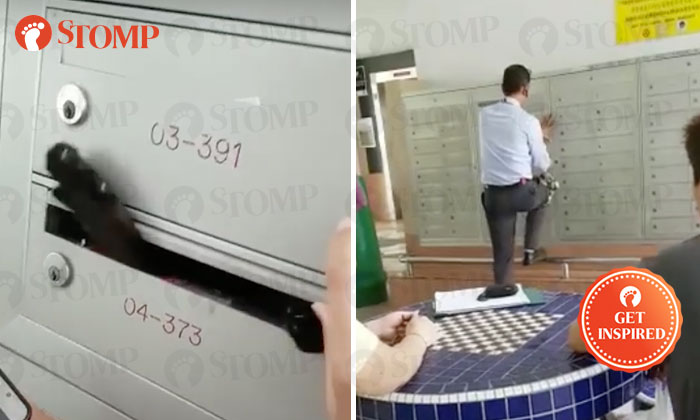 A black cat trapped in a letterbox was rescued thanks to the combined efforts of Stomper Nurhayati, residents of Bukit Batok West Avenue 8, the Jurong Police Division and the Singapore Post.

The incident happened yesterday (Sept 8) at the void deck of Block 169, Bukit Batok West Avenue 8 at around 1pm.

In an interview over the phone, Nurhayati told Stomp how she had come across the poor feline.

She was on the way home when she heard a cat meowing.

To her surprise, she found a cat inside a letterbox.

The poor cat could be seen reaching out of the letterbox with its paws, desperate to get out.

Nurhayati quickly called the Town Council hotline and was referred to the Singapore Post.

She was subsequently referred to Housing and Development Board (HDB).

However, Nurhayati decided to call the Police instead, and two officers were dispatched to the scene to help.

An officer called the Singapore Post, and an officer arrived at about 1.30pm to open the letterbox.

Videos of the incident were also uploaded onto Nurhayati's Facebook page.

“I just feel grateful that the cat is free now.”

Related Stories
Biker who gave ride to 80-year-old man lost on PIE: "If that was my dad, I'd want someone to help"
358kg of fish caught at Pasir Ris fishing pond -- all in the name of charity
Man's dinner interrupted by Grab driver -- but he has never been more thankful
More About:
inspiring
cat
letterbox
police
SingPost