'Pontianak' on tree at Bukit Batok? Here's why Stomp thinks it's not 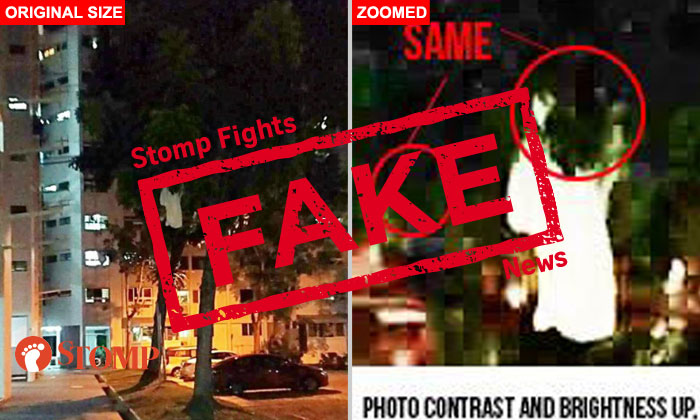 A viral photo showing a long-haired white figure up on a tree in Bukit Batok. Fret not, the Stomp Team has analysed the photo to show why this is not a 'pontianak'.

The photo, showing what appears to be a white figure up on a tree was shared on Pencari Entiti Crew - P.E.C and Wujud (Paranormal Team) Facebook pages.

In the post on the P.EC Facebook page, it was said that the photo was taken at Bukit Batok, although this cannot be confirmed.

Netizens who saw the photos were divided in their views of it.

While some said it looked like a 'pontianak' (female vampire), others were more sceptical.

So, the Stomp team decided to do some research on the image.

We increased the contrast and brightness of the image, and zoomed in on the white figure.

While it appears that the photo was not altered digitally, what appears to be the hair of the figure is actually the leaves on the tree.

The white portion appears to simply be a piece of cloth on the tree.

Stomper Zat has also clarified that the 'pontianak' in Bukit Batok is just a piece of cloth on a tree.

The Stomper took a photo of the tree in broad daylight, revealing the large cloth stuck on the branch.

With this, Bukit Batok residents can sleep better at night.