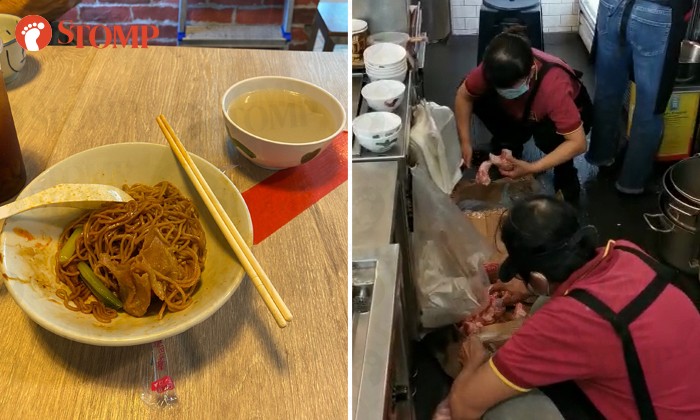 The Singapore Food agency (SFA) is investigating an incident in which employees of Pontian Wanton Noodles were seen chopping and handling meat on the floor at its Paya Lebar Square outlet.

A Stomper witnessed the incident while dining there on September 29, at around 3.30pm.

She took photos and a video that show two staff members handling and chopping meat on the floor.

The Stomper said: "We told Pontian employees directly that this was not hygienic and asked for their manager's number, but they ignored us."

The Stomper subsequently reported the matter to SFA.

In response to a Stomp query, SFA said it has received feedback and is investigating.

It added: "Food safety is a joint responsibility. While SFA puts in place and enforces the regulatory measures, food operators must play their part by adhering to good food hygiene and preparation practices.

"Members of the public who come across any potentially errant food operator should report to SFA via the online feedback form. As part of the enquiry and gathering of evidence, SFA may engage the feedback provider for more details."

SFA also said that it will not hesitate to take enforcement action against errant food operators if it has obtained sufficient evidence.

This is not the first time Pontian Wanton Noodles has raised concerns over food hygiene practices.

In 2019, the restaurant chain made headlines after an employee allegedly dropped dumplings on the floor, picked them back up, and placed them in a container with other dumplings.