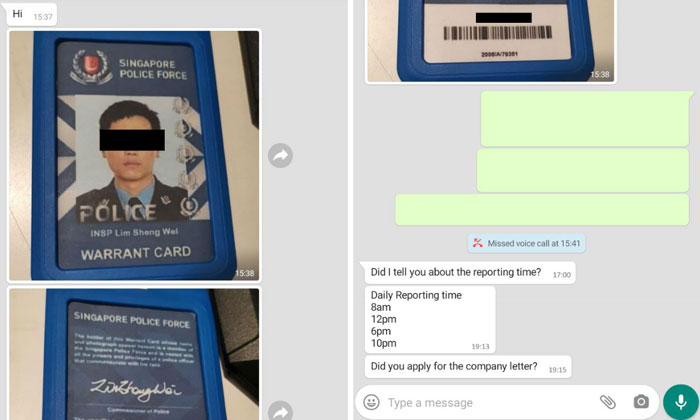 The police warned the public about a variant of Government Officials Impersonation Scam (GOIS) where scammers allegedly pose as officers from the Singapore Police Force (SPF).

The scammers would present fake SPF warrant cards to validate their identity in order to convince the victims that they were under investigations.

The police said in this variant, the victims received unsolicited phone calls from callers who claimed to be from the Singapore High Court.

Their calls were supposedly transferred to a 'police officer', who informed the victims that they were being investigated for money-laundering activities.

The victims were instructed to download the LINE or WhatsApp messaging platforms for further communication with the 'police officer'.

The victims would then purportedly be shown a fake SPF warrant card on the messaging platforms. For LINE, the victims would also be added into a chat group named 'Reporting Platform'.

The victims would then be instructed to provide their personal details and that of their family members, including the victims’ bank account details, for record purposes.

Victims were subsequently instructed to surrender money for investigations by making transfers to various bank accounts controlled by the scammers.

The victims were promised that the money transferred to these bank accounts would be returned to them upon completion of investigations.

In some cases, the victims were also asked to hand over control of their bank accounts and SingPass accounts as part of the purported investigations.

The police emphasised that the police will not instruct members of the public to transfer money to designated bank accounts for investigations.

Police officers will also not identify themselves with the SPF warrant card on online platforms.

The public is advised to take the following precautions when they receive unsolicited calls to surrender money or banking credentials to others in order to avoid criminal investigations:

If you wish to provide any information related to such scams, call the police hotline at 1800-255-0000, or submit it online at www.police.gov.sg/iwitness. If you require urgent Police assistance, dial ‘999’.