Police shoot wild boar after it goes on rampage at Punggol 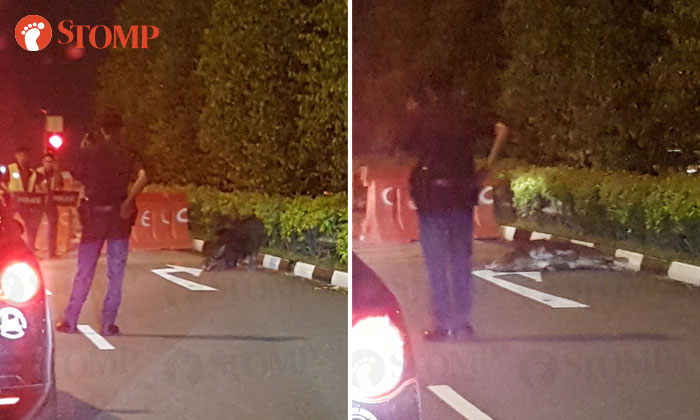 The police shot a wild boar that had gone on a rampage in Punggol last night (Nov 21).

Stomper JY was travelling in a car along Sengkang East Road when she noticed a barricade had been set up by the police.

She looked out of the car and saw the wild boar in front of an officer.

"Its position looked like it was about to attack or lunge forward," she said.

Soon after, she heard a gunshot and saw the boar fall to the ground.

"The police then quickly moved to clear the area around the boar," said the Stomper. "They did a good job in clearing the path for motorists quickly."

In a statement, the police said that they were alerted to an accident involving a wild boar and a car on Punggol West Flyover.

The injured wild boar was lying on the road when police officers and ACRES personnel arrived at the location.

The wild boar got up and charged towards the officers and passers-by in the area.

It continued to charge forwards even after officers fired their Tasers at the boar.

"As the wild boar was rampaging and was a danger to the people in the vicinity, an officer had to draw his revolver to fire a shoat at it, to stop it from injuring anyone," said the police.

The tusked boar, which measured 1.5m from head to tail, was shot in the neck.

It was subsequently handed over to ACRES personnel who had to put it to sleep due to its injuries.

The Agri-Food & Veterinary Authority (AVA) posted a statement on Facebook saying that it will monitor the situation at the Punggol area closely.

It added that it will continue to work with relevant stakeholders, such as Acres, Wildlife Reserves Singapore, NParks, and the National University of Singapore (NUS), to manage the wild boars to ensure public safety.

"We are exploring various measures such as erecting barriers to prevent wildlife from encroaching onto roads, and putting up signages about wildlife crossings at specific locations to warn motorists," it wrote.