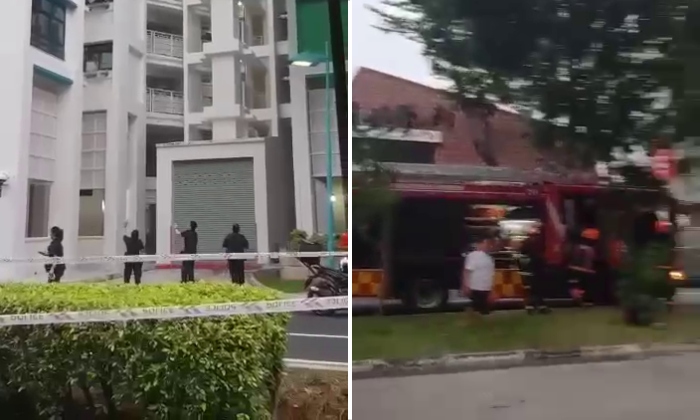 The police and the Singapore Civil Defence Force (SCDF) released a joint statement on Friday (Sept 23) that they were aware of online comments on whether they could have done more to prevent the woman from jumping from height at Block 36 Eunos Crescent on Sept 20.

The statement said that the police received a call for assistance at the location at 6.30pm.

The first pair of police officers arrived at the scene at 6.43pm and proceeded to the unit immediately but the unit was locked.

The officers on the ground floor engaged the woman to try to dissuade her from jumping off the ledge, using both English and her mother tongue. However, the woman was not receptive to the attempts by the police officers to calm her down, nor to retreat from the ledge into the unit.

SCDF was alerted to this incident at 6.43pm and a Red Rhino was the first SCDF resource to arrive at the scene within eight minutes. This was followed shortly by a fire engine and an ambulance.

However, the woman jumped off the ledge within minutes of SCDF’s arrival, just when the crew was in the midst of bringing rescue equipment up to the unit and as the safety life air pack was en route to the location.

The police and SCDF said their officers who attended to the incident had acted appropriately and in accordance with procedures.

"We would also like to acknowledge the efforts of two members of the public who tried to engage the woman prior to the police’s arrival when they saw her on the ledge," said the statement.

Related Stories
Woman taken conscious to Changi General Hospital after fall from 5 storeys at Eunos Crescent
Police officer believed to have shot twice into the air before shooting self on Marina Bay boardwalk
Worker, 28, injured after falling from height at Chinatown Point
More About:
police
scdf
Eunos Crescent
jump