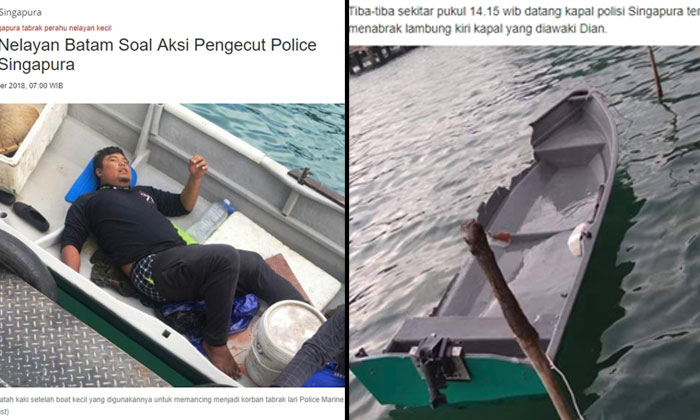 The police have issued a statement to Stomp, refuting reports by Indonesian media that a Singapore Police Coast Guard (PCG) boat had collided with an Indonesian fishing boat on Wed (Oct 31), causing injuries to a fisherman.

A Stomper alerted Stomp to reports published by Tribun Batam and Batam News saying that the fisherman, Dian Marzuki, was allegedly hit by a PCG vessel, damaging the left side of his boat and causing his engine to be detached.

He had been fishing with five friends who rescued him after he fell into the water.

According to Batam News, Dian suffered a broken left leg and was taken to hospital for treatment. 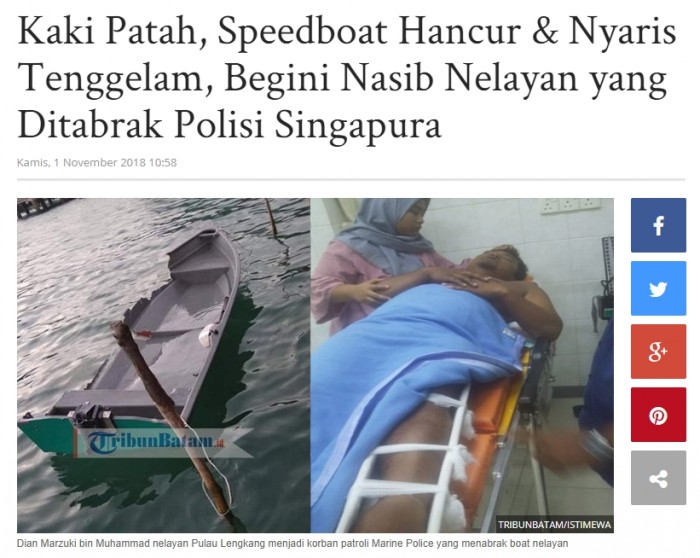 A report on the incident published by Tribun Batam.

The local media also reported that the PCG immediately left the scene without rendering assistance to Dian.

Reports added that the fishermen were in Indonesian territory at the time of the incident.

In response to a Stomp media query, the police clarified that there was no such collision.

The police said: "On Oct 31, 2018, at 3.04pm, a PCG boat detected a cluster of sampans that had illegally intruded into and were fishing in Singapore Territorial Waters (STW) south of St John Island, and proceeded to pursue them.

"The PCG boat later noticed that one of the sampans had capsized within STW.

"PCG officers observed that a man was rescued by persons from the other sampans and that the capsized sampan was towed away, before the PCG boat could reach them.

"The PCG officers then proceeded to warn the persons in the remaining sampans not to enter Singapore illegally.

"The police added that the PCG boat is equipped with CCTVs which did not capture any collision.

"Technical inspection of the PCG boat similarly did not reveal any indication of collision."

Related Stories
Police officers who rescued angler caught in thunderstorm: "There's no typical day at work"
Man fishing on boat caught in thunderstorm, thankful for police and ferry crew who came to his rescue
'Floating object' at Woodlands Waterfront turns out to be swimmer, who gets arrested for unlawful entry
More About:
police
batam
fisherman
Indonesia
Accidents
sea
illegal