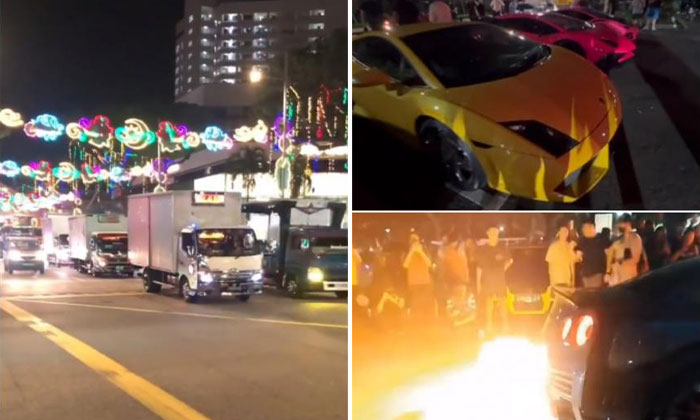 The police are investigating two incidents of vehicles driving in a convoy and one case of a group of cars gathering in a carpark.

Five men, aged between 22 and 26, were identified as organisers of the events in April and they will be investigated.

On April 24, a convoy of vehicles including prime movers, minibuses and lorries were travelling on Changi Road towards Geylang Road.

A video of the fleet of more than 30 heavy vehicles driving through Geylang Serai, honking their horns and shining lights, has been circulating on social media.

The commotion attracted the attention of many pedestrians who recorded the parade on their mobile phones.

The police said they have identified three men, aged between 22 and 26 years old, as the organisers.

"The three men will be investigated for conducting an event on the road without a permit," they added.

The organiser of the event, who identified himself only as Nas, said the group had initially wanted to go to the Geylang Serai area on Hari Raya Aidilfitri eve on Monday to celebrate.

He added that the recent relaxation of Covid-19 measures was part of the reason to bring forward the celebration.

During the operation, a convoy of motorcycles was spotted travelling on Changi Road towards Geylang Road.

"The police have identified two men, aged 22 and 23 years old, as the organisers. They will be investigated for conducting an event on the road without a permit," the authorities said.

In addition, 13 offences relating to illegal vehicle modifications were detected during the operation. 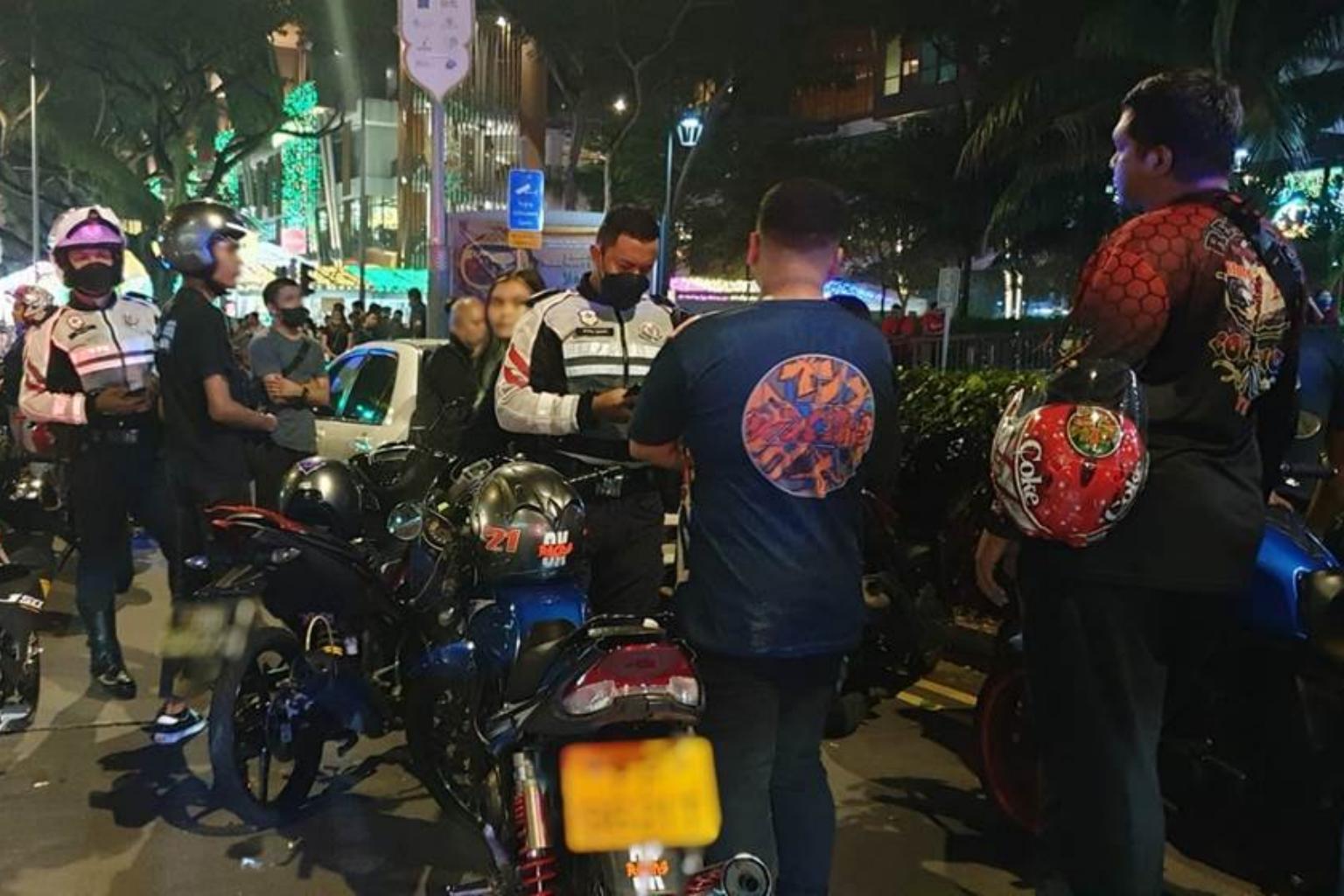 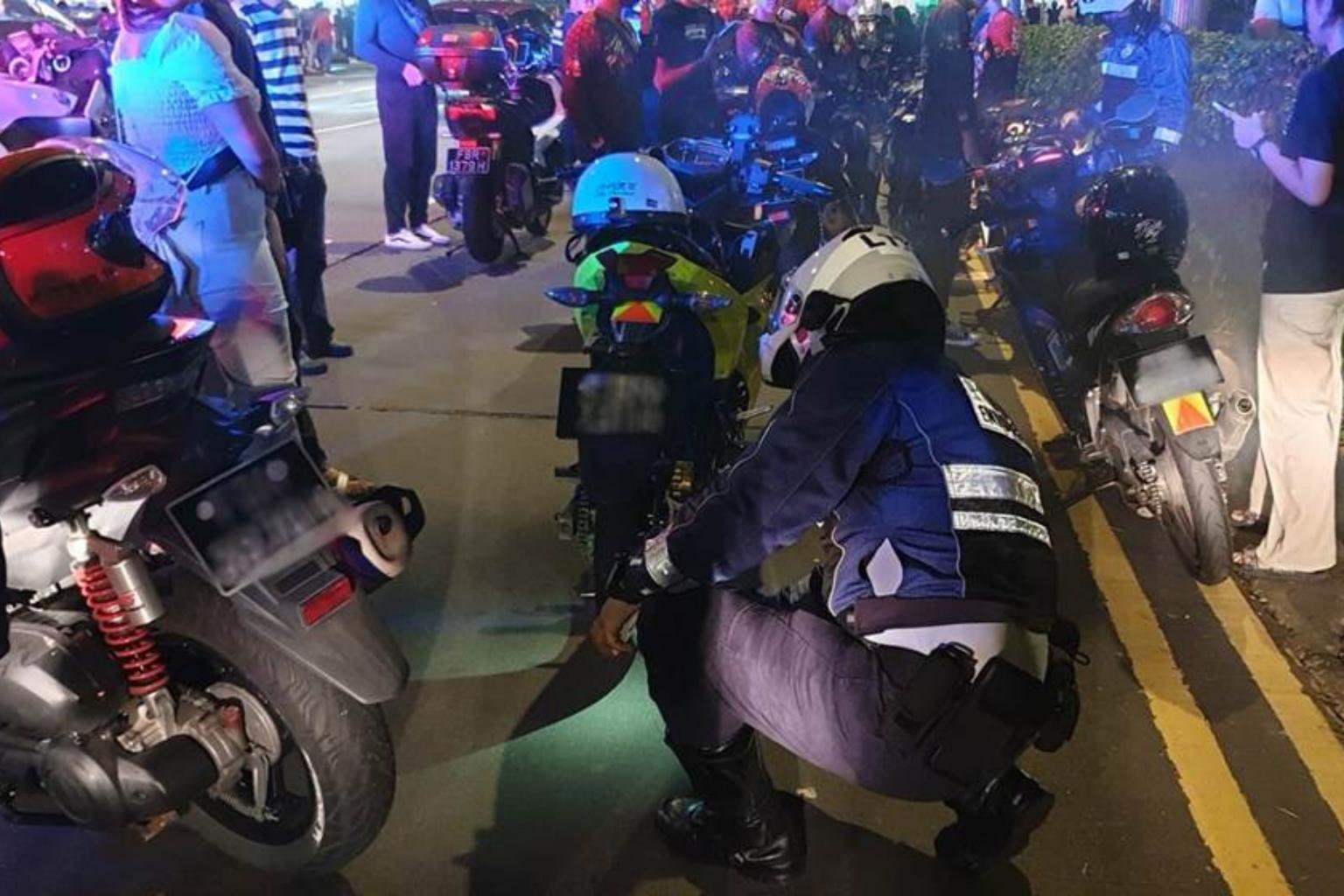 During the operation, a convoy of motorcycles was spotted travelling along Changi Road towards Geylang Road. PHOTO: SINGAPORE POLICE FORCE

A summons was also issued for an unapproved type of protective helmet.

The police are also looking into an incident last Friday, where a group of cars gathered at the open-air carpark outside a Decathlon store in Kallang.

They included a row of Lamborghinis, flashy red sports cars as well as vintage cars.

The gathering is said to have been organised by car enthusiast group Basement 1.

In a Facebook post on April 30, the group said it was aware that law enforcement officers were present during the event.

"Initially, they did not take action as they already knew of this event and gave the green light to proceed as it was very clear that no rules were broken to organise a meet," the group said.

"However, there were people being irresponsible at the end of the meet and we sadly could not control them. Therefore, law enforcement had to take action."

If convicted of conducting an event on a road without a permit, an offender can be jailed for up to three months and fined up to $1,000.

For repeat offenders, the maximum penalty is doubled.

"The police would like to remind the public that conducting an event on any road or part thereof without a police permit is illegal in Singapore and we will not hesitate to take firm action against those who choose to flout our law."