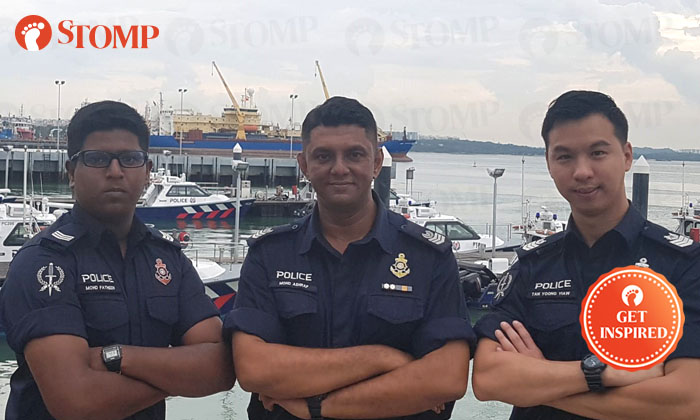 Stomp spoke to three Police Coast Guard (PCG) officers who came to the rescue of an angler who was caught in a thunderstorm on Sep 4.

In a previous Stomp report on Sep 6, Stomper Anthony had shared with Stomp how grateful he felt towards the officers who were crew members of boat "PC220", also known as, "Silver Angel", for coming to his aid during the bad weather.

SSS Ashraf, who has been working with the PCG for over two decades, said: "On that day I received the call for assistance, it seems that it was an engine failure. I had responded to it in about four to five minutes.

"While responding to the engine failure, there are some dangerous things that can happen to the boat. First, it can get hit by a passing vessel, especially big vessels. Second, the craft could have slowly encroached to very shallow waters.

"When I was responding to his call, the weather was good, but after one or two minutes, it took a turn for the worse. I was actually having restricted visibility."

SSS Ashraf said that he wasn't able to locate Anthony initially, even though the latter said he was at the SAF Ferry Terminal.

"So I called him and asked If he was able to see my blinker and to direct me to him," he said.

"When I actually located him, he was right in the middle of a busy channel, where big vessels pass through to go to Pasir Gudang.

"So I went next to him, the closest I can. I called him and told him I was next to him. He appears calm and I have to ensure he remains that way. So I had to tell him what we had to do now, and why we were doing it.

"So I was just watching through my radar and seeing if there were any big vessels coming towards that direction since I was able to divert the small ones away."

SSS Ashraf added that his shift wasn't actually over but it could be the last end of it.

"But whatever the situation is, even if I'm reporting off, heading back to base, if there is a need, we will respond. So for us, it is very normal.

"We respond to any call for help, regardless of whether we are on shift or we are off shift, as long as we are still within the area," he said.

"But it is never fixed, that's why we never have appointments and you'll never know," added SSS Ashraf with a laugh.

SSS Ashraf also told Stomp the importance of reassuring those who are stranded, as it is crucial that they remain calm so as to be able to follow instructions clearly.

"It is also the same approach if I were to attend to an injured person. You have to tell the injured person, I'm a first aider, I'm a medic, I'm here to assist you. So that's the very first thing, the first approach that we take," he explained.

"He [Anthony] didn't panic at all. When I told him what I would be doing, he didn't question and just followed the instructions.

"That's why it is important to assure because if the police are there, he would probably be interested to know what are we doing, so I continuously updated him and kept in communication with him."

However, there was yet another obstacle.

"When the weather cleared up, his craft was actually heading towards the breakwater and it was going quite fast. So I let him know what would be my next line of action, I told him I was going to come next to him and I'm going to tie my ropes and I'm going to pull it out.

"If we had not done that, his craft would have hit the rock and the damage to the boat may cause injury to him. It was something that I had to do immediately and he understood why we had to do that. We stayed with him until the arrival of the other agency. I think the whole process took about 45 minutes."

SSS Ashraf also noted one thing that Anthony has done that could be a lesson to others.

"He had the numbers he needed to call for help. For any types of crafts, if you go out and you need help you must know what are the numbers to call. That's why he got help quite fast," he said.

When asked if this was a typical case, SSS Ashraf said being in this line, there was no such thing as "typical".

He said: "Out at the sea, we don't have any typical cases because things escalate, weather changes, the environment changes, so this is what being a part of the PCG is about. There is no typical case.

"It's difficult to say what a typical day at work is because sometimes we really don't have that, but checking on crafts is something which we [often] do, whether is there any floating objects, I have to confirm that it is not a swimmer.

"If there are any crafts loitering, I need to know what their intentions are. Of course, there will also be times when we have to perform search-and-rescue, like when people who went for a swim and never came back, these are some of the things I've dealt with in the course of my work with the PCG.

"But if you ask me what is a typical day, I don't think there is, I don't know what's in store for me. It's unpredictable.

"But there are some cases which I have attended to and found challenging, which are those that involve an injured people, such as those with a head injury.

"I have to consider, 'how do I transport them from the jetty to my craft without aggravating their injuries', as head injuries are very serious.

"It is very challenging when you have to move an injured person on a stretcher with limited space and not aggravate the person's condition until we get back to base and hand them over to the ambulance.

"Another challenge is working out at sea itself is a challenge, we don't have good weather all the time, especially when one is on the night shift, it requires the officer to be very alert, as well as in bad weather. That is when we may receive calls for help, for example those who are kayaking.

"Although we have difficulties [because of the bad weather], we still attend to it, we have to. And usually out at sea, you have to deal with limited resources and trying to locate a person is difficult.

"I was from the land division, if you tell me to go to Block 110 Bedok North 02246 for example, I can go there straightaway. But now at sea, if you give me a location, it will take more effort to locate where exactly it is."

Before sailing off, there is also a need to conduct a pre-sail check.

He added that information on the weather and the tide have to be gathered as well, as it is something crucial to be kept in mind when rendering assistance to people because if the tide is too low, there might be limitations when travelling.

When being commended for his way of handling the situation, SSS Ashraf pointed out that it was also due to his "very competent crew".

"The situation isn't always ideal so we have to make do with whatever we have.

"But if I may add on, I have a very competent crew, in situations like this they must know what to do, it is not the time to ask and to learn. When the time comes, they have to do what they need to," said SSS Ashraf.

After expressing his praise towards his crew members, SSS Ashraf urged them to "talk ah".

SSGT Tan, who has been in this line for seven years, said that they had to act fast as time was of the essence.

"We have to just go out and secure the boat and it was raining so that's why we got wet," he said.

"We went through training of how to row our boat, how to secure the ropes and how to tow the craft. This training and our experiences definitely helped the situation."

SCSGT Faris, who has been with the PCG for six months, said: "Actually we have to come up with improvisations on the spot because not all boats are the same, so we have to improvise which part of the boat to tie the rope to and we have to constantly communicate with one another."

When asked how it felt about getting "Stomped" for his actions, SSS Ashraf said: "I think with the advance in the technology of the media, the police will always be captured somehow, either for good or for bad reasons.

"So I take it in a very positive way, it can be information that can be shared with the community at large. It is something that is unavoidable in today's era of policing."

Click below to watch the interview with the officers.