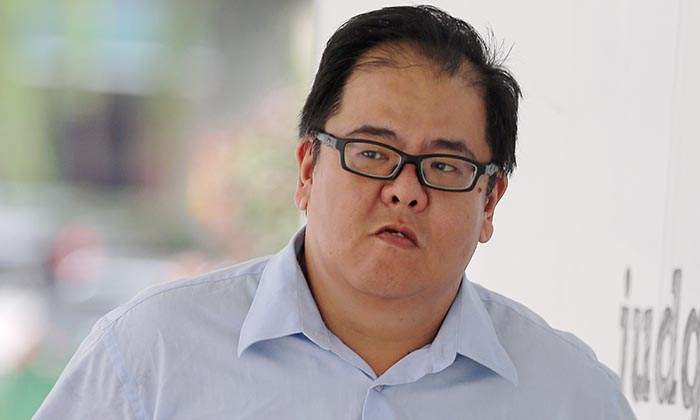 Seah Chin Peng, 48, had lied about his actions and claimed that he had stepped on it when he "lost his balance".

He also told Inspector Paige Tan that members of the public had thrown away the $28 walking stick during an incident in Waterloo Street on Oct 31, 2016.

The truth emerged when the authorities viewed footage from his colleague's body-worn camera.

Seah also pleaded guilty last month to committing mischief in damaging Mr Zeng's walking stick. He has been suspended from service since Oct 6, 2017.

Mr Zeng has had run-ins with the police previously. The 65-year-old, who was diagnosed with nose cancer in 2014, earned the nickname "Parrot Man" after blaming his pet parrot for getting him arrested for using abusive language on two police officers in 2008. He was convicted and fined $2,500.

On the day of the incident, the police received a complaint that Mr Zeng was "begging and causing nuisance" outside a temple in Waterloo Street. Seah and Sergeant Durganivashini Yogendran arrived at about 10.30am, and Seah asked to take a look at Mr Zeng's walking stick. The older man handed it to him.

Deputy Public Prosecutor Deborah Lee said during the trial: "The accused then knocked the walking stick several times on the floor... before stepping hard on the stick with his right foot, causing it to become bent and diminish in utility."

Infuriated when he saw this, Mr Zeng hurled vulgarities at Seah, who arrested him for disorderly behaviour and using abusive language against a public servant. Mr Zeng was taken to the Central Police Divisional Headquarters, but no further action was taken against him.

Seah then lied to Insp Tan on Oct 31 and Nov 3, 2016. However, footage from a body-worn camera used by Sgt Durganivashini showed Seah deliberately stepping on Mr Zeng's walking stick before arresting him. It also showed Seah placing the stick at the back of a police car before driving away.

Seah, represented by lawyer Sofia Bakhash, said during the trial that he has memory issues after having a stroke in February that year. He told the judge: "Why I stepped on the walking stick, I don't know... I can't elaborate more on why I spoilt (it)."

In an earlier statement, the police said they have started disciplinary proceedings against Seah.

Seah's lawyer said yesterday that he intends to appeal against his conviction and overall sentence.

He is currently out on bail.