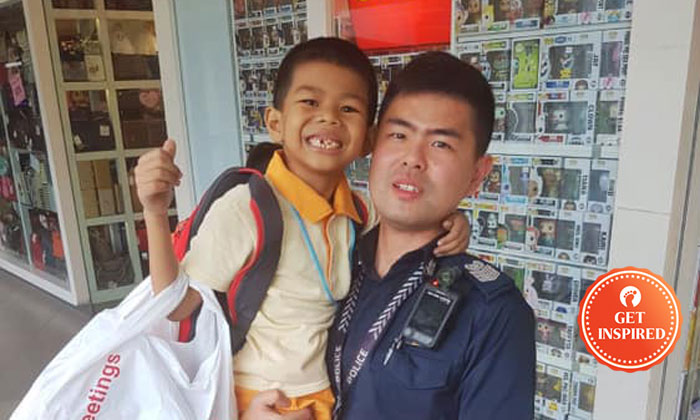 When her seven-year-old son ran ahead as she was taking his two younger siblings to a pre-school, she did not bother to chase after him.

He would often run off and then wait for them at My First Skool at Block 66 Kallang Bahru.

But yesterday was different.

When the mother, who wanted to be known only as Madam Siti, got there, little Danish Fazlee, who has mild autism, was nowhere to be seen.

But she was still not too concerned because "he likes to visit some toy shops along the way".

Madam Siti, 24, told The New Paper: "He knows his way around. He has never been out alone and would always wait for me."

She searched the neighbourhood twice before returning to their home at nearby Block 61.

But Danish, who goes to AWWA School for children with special needs in Hougang, was not there. By then, 45 minutes had passed.

The worried housewife called the police, who put out appeals for information on the whereabouts of her son, who was last seen at 10am wearing a white and orange shirt, and orange shorts.

The Special Operations Command and Ground Response Force were also activated to search for him.

Unknown to his mother and the police, little Danish had embarked on a potentially dangerous "adventure" on his own.

Madam Siti said: "When I saw so many police officers, the gravity of the situation hit me. It never occurred to me that he would run off. I just broke down."

A spokesman for My First Skool told TNP that Madam Siti had appeared anxious when she dropped off her two children.

She said: "She asked me if I had seen Danish, who had previously attended the childcare here. When I said no, she asked me to call her if I heard anything about him."

Residents and shopkeepers said at least 10 police officers combed the area for about 30 minutes.

A shopkeeper, who wanted to be known as Ms Liem, said: "It is usually quiet, so seeing so many police officers was shocking.

"They were asking people questions, and there was a woman crying."

Madam Siti said the police later called to tell her they had found out that Danish had boarded a bus and alighted at a stop just before the Eunos bus interchange.

Madam Siti said that when she and her mother, 43, were in a taxi heading to the bus stop, she started fearing the worst.

"I was praying he would still be there. I was so scared that he left the neighbourhood alone," she said.

"I kept thinking that he would not obey traffic rules and would get into an accident. He is an active boy and might dash across the road without me around."

When they got there and could not find him, she was panic-stricken and kept calling her son's name while combing the area with her mother.

Then the police called again to say that they had found out that Danish had taken a train from Eunos and then a bus to Serangoon.

Said Madam Siti: "I got even more worried. Serangoon is far from my place and we hardly go there. Just the thought of him crossing the roads was unbearable."

When Madam Siti and her mother reached Serangoon, the police said they had found him in a toy shop on the fourth storey of Nex shopping mall.

The police said in a Facebook post that Danish was found after about three hours by Serangoon Neighbourhood Police Centre officers who were looking for him in the mall.

Danish received a souvenir from his "adventure" when an officer bought him a toy plane.

Madam Siti said: "I was so relieved when I saw him that I teared up again. He was smiling happily and all he wanted to do was to go home and play with his toy.

"I can't thank the officers enough for their hard work and for reuniting us.

"He won't be running off by himself any more because I am making sure that I hold on to his hand tightly from now on."