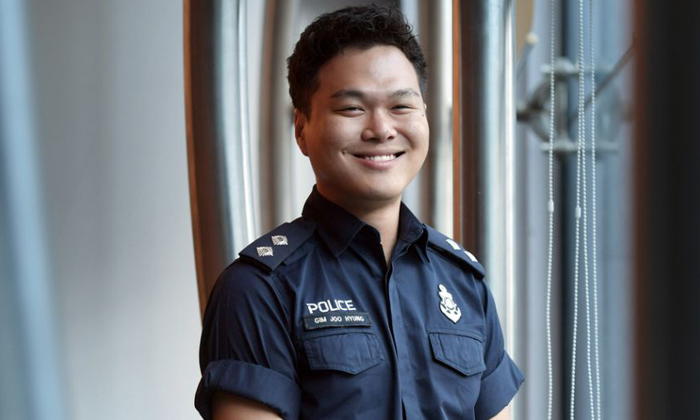 A South Korean man who had served as an interpreter for the Singapore Police Force (SPF) during the Trump-Kim Summit here in 2018, was caught in February this year using a pinhole camera to take videos of women using a toilet.

Gim Joo Hyung, a Singapore permanent resident and an operationally ready national serviceman (NSman) with the police, was sentenced to 22 weeks' jail on Monday (Oct 4) after he pleaded guilty to three counts of voyeurism.

Twenty-four other charges were considered during sentencing.

The court heard that Gim bought a pinhole camera and secretly installed it in a toilet on Feb 23 this year.

"The accused was careful to ensure that the camera was properly concealed and not immediately visible," said Deputy Public Prosecutor Sarah Thaker.

"He then turned on the recording mode on the camera and left the toilet thereafter."

A 23-year-old woman later spotted the device and removed its memory card.

Viewing its contents, she discovered videos of herself and two other women using the toilet - as well as footage of Gim handling the camera.

The police were alerted. Officers later seized Gim's personal laptop, and a forensic examination revealed that it contained 178 obscene videos downloaded from the Internet and 31 upskirt videos.

Gim, 28, admitted to investigators that he began recording upskirt videos in 2013 after coming across similar clips on pornographic websites.

He used his mobile phone to record women in public places, before transferring the clips to his laptop to rewatch them.

Details about the victims and the location of offences cannot be disclosed due to a gag order.

Gim could have been jailed for up to two years and fined or caned for each count of voyeurism.

Gim, whose parents are South Korean, has spent most of his life in Singapore.

He first made headlines here on a more positive note, when he was the main interpreter on the ground for the SPF during the Trump-Kim Summit held in Singapore in June 2018.

He was an NSman with Singapore's Police Coast Guard at that time.

The SPF told The Straits Times in a statement on Friday that Gim served his full-time national service with it from April 22, 2013 to Dec 13, 2014.

SPF added: "He is currently an operationally ready national serviceman... Gim was no longer a full-time national service officer nor attending in-camp training with the SPF when the offences were committed in February 2021.

"Notwithstanding the above, SPF has strict guidelines in place for operationally ready national servicemen and will commence internal action against him following his conviction."