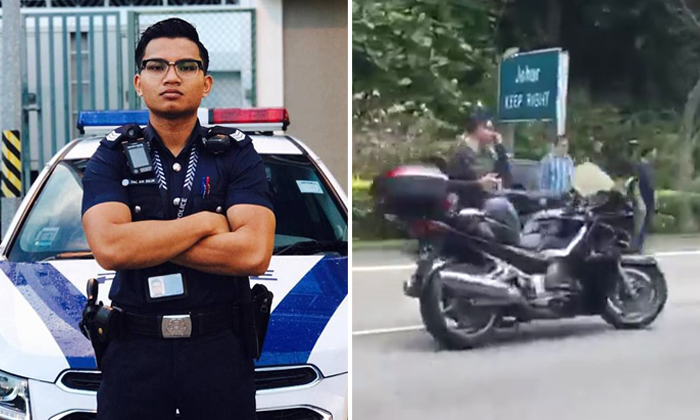 A 40-year-old lorry driver is currently assisting with police investigations.

Stomp understands that the motorcyclist is believed to have self-skidded before crashing into a lorry.

A 23-year-old male motorcyclist was killed in an accident along the Seletar Expressway (SLE) yesterday afternoon (Sep 10), while his pillion rider was left injured.

Police told Stomp in response to media queries that they were alerted to the accident, which occurred towards the Bukit Timah Expressway (BKE), at around 1.33pm.

The victim, Faiz Bin Salim, was unconscious when conveyed to Khoo Teck Puat Hospital (KTPH), which had been alerted to be on standby to receive him.

According to the Singapore Civil Defence Force (SCDF), he had suffered from traumatic arrest and cardiopulmonary resuscitation (CPR) was performed on him while on the way to the hospital.

Mr Salim, who had a head injury and a fractured arm, subsequently succumbed to his injuries at KTPH.

His 22-year-old male pillion rider sustained abrasions on his left limb and was conveyed conscious to KTPH.

Stomp understands that the deceased was a Police NSman.

Mr Eddy Wahid, who identified himself as the victim's colleague at Woodlands West Neighbourhood Police Centre, told Stomp: "He was my closest friend."

He also described Mr Salim's death as "a great loss for all of us" and shared more about their friendship.

Read the full update here: Police NSman killed in SLE accident: 'He was someone you could call at 2am about your problems'