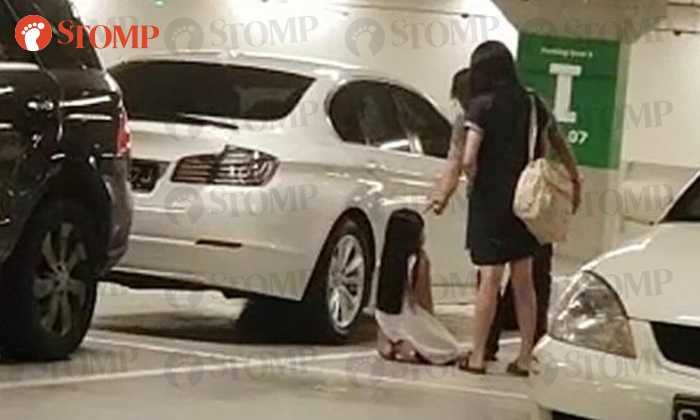 The police and the Ministry of Social and Family Development (MSF) are investigating an incident where a man slapped a young girl while she knelt in public.

Stomper Anonymous witnessed the incident, which occurred at the carpark of IKEA Tampines on Monday (Nov 5), at around 9pm.

Anonymous, who believes the girl was the man's daughter, previously told Stomp: "I do not know what the man was upset about, but he was saying things like, 'I love you, but you cannot say these kind of things to me' and 'It's no longer your mum's place, it is my place'."

A video of the slapping, filmed by Anonymous, went viral after being posted on Stomp's website and Facebook page on Wednesday (Nov 7).

On Facebook alone, the video has garnered over 41,000 views to date.

It also prompted a Facebook user, known as Richard, to report the incident to MSF.

Appealing for information about the man in the video, Richard also commented: "If this man can behave this way in public, there is no telling what he has done in private."

An MSF spokesman told The New Paper on Thursday night (Nov 8) that the ministry and police are looking into the matter.

IKEA also confirmed that the incident occurred on its premises and that it has made a police report.

"From the images in the video, we can verify that it's an IKEA carpark," a spokesman told TNP.

There are also concerns about the girl remaining still during the incident as it could mean that "this had happened before and she is used to it".

Related Stories
Man shouldn't be slapping girl while she kneels in public, says Stomper
Police investigating case of man repeatedly pulling child from car and throwing him to the ground
Video of woman forcefully covering child's mouth and pushing his head on MRT train sparks debate among netizens
More About:
child abuse
inappropriate