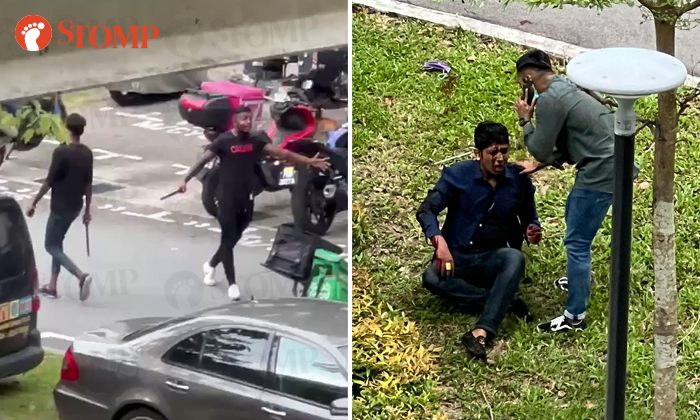 A police manhunt operation is under way for two suspects who used weapons to attack two other men in Boon Lay Drive.

Preliminary investigations showed that the duo are known to the two victims, police said on Thursday morning (April 7).

The police said they had received a call for assistance at Block 175 Boon Lay Drive at about 5pm on Wednesday.

The two injured men, aged 22 and 23, were conscious when taken to hospital.

In videos circulating on social media, two men can be seen wielding long-bladed weapons at a carpark.

In one video, a voice is heard in the background, shouting that the police have already been alerted. The duo are also seen pacing back and forth, before fleeing the scene.

One of the victims appeared to have blood streaming down his face.

Investigations are ongoing. The police said the harbouring of fugitives is a serious offence that is punishable with jail and fines.

The incident comes on the back of a string of recent violent incidents in public spaces involving bladed weapons like swords, knives and razor blades.

Earlier this week, a man was caught on video retrieving a pointed silver-coloured object from a car during a scuffle near Katong Square shopping mall in East Coast Road.

On March 14, a 37-year-old man armed with a sword was caught on video near Buangkok Square mall swinging the weapon and stopping oncoming traffic.

He was swinging it at a pedestrian before other members of the public restrained him until the police arrived and arrested him. The pedestrian was injured.

In another incident, on March 23, a knife-wielding man refused to drop his weapon and continued advancing towards police officers.

Three Taser shots were fired at the 64-year-old, but he continued moving towards the officers. As there was an imminent threat to the safety of the officers, one of them fired his pistol at the man, hitting him in the chest. The man was taken to hospital and later pronounced dead.

The recent spate of cases was raised in Parliament on Monday.

He added that it has been averaging about 150 annually for the past five years.

Mr Tan was responding to questions by Mr Zhulkarnain Abdul Rahim (Chua Chu Kang GRC), who had asked about measures to protect the public in the light of recent crimes.

Mr Tan said that for urgent incidents, including those involving dangerous weapons, the police are generally able to respond within 15 minutes of the call.

Mr Zhulkarnain also asked if there could be a blanket ban on carrying a knife, razor or other sharp objects in any school, or public or commercial premises.

These are swords, spears, spearheads, daggers, bayonets, and dangerous bows and arrows.

This list will be expanded to include items like knuckledusters and flick knives when the Guns, Explosives and Weapons Control Act replaces the Act later this year.

Regulated items will be subject to greater control, including the regulation of sales on e-commerce platforms, added Mr Tan.

He also addressed the fatal shooting of the knife-wielding man last month, saying
that when a person refuses to comply with police instructions and poses a threat to the lives of those around him, including police officers, the police may use lethal force.