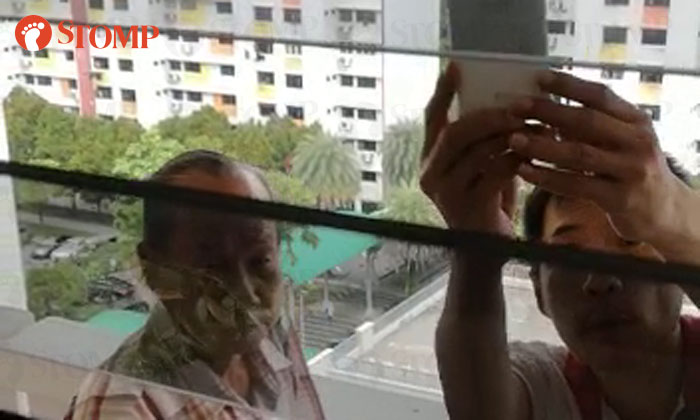 The police are looking into a dispute between two families at Block 234 Toa Payoh Lorong 8 over the past four years.

Stomper Woon shared with Stomp that their next-door neighbours have repeatedly shouted at his own family, stalked them and recorded them on their phones.

"Over the past four years, we have been mentally tortured," said Woon.

"The family of four accused us of hacking into their Internet and blocking it.

"They said we hacked into their Facebook accounts and chatted with their friends.

"One of their sons said we shot lasers at them so they cannot work.

"They have even called the police on us many times, accusing us of making a lot of noise all day and night."

Woon said the familiy's allegations are false and that the father and one of his sons has been shouting at them every day.

"They have hurled vulgarities at us outside our door accusing us of killing people," he said.

"They also stalk us whenever we leave the flat and snap photos of us.

"They even know what time my mum goes to the market and what time we all leave the house.

"They shout in the morning, at nood and in the middle of the night without fail.

"I have to wear ear plugs in order to get any sleep.

"All of this has been very mentally stressful for my family.

"My mum is already in old age and we are all very scared and worried.

"Both me and my younger brother are not usually at home as we are working.

Woon shared with Stomp a video taken on May 19 of their elderly neighbour shouting vulgarities at his family.

He made a police report later that day.

The Stomper also shared a video of the man and his son shouting at him on another occasion.

Then the man tells them to wait for a "lawyer's letter" and that "downstairs also got noise".

Woon said that after making multiple police reports they have been advised to stay indoors, close their door and avoid their neighbours.

"We kept in silence in fear hoping it will die off but it is getting worse.

"By keeping quiet they curse and swear at us every day even more especially during the circuit breaker period.

"They threaten to 'chop' and kill us.

"It is really very mentally straining for all of us.

"We are human beings and are seriously very distressed."