Police investigating man who forced his way onto train with non-foldable bicycle: SMRT 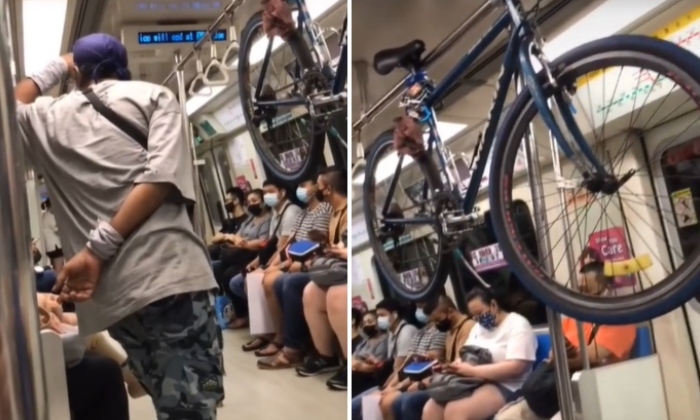 A man who forced his way onto the train with a non-foldable bicycle is being investigated by the police, said SMRT in a statement on Friday (Dec 18).

The incident, which happened on Wednesday (Dec 16), first caught the attention of netizens after a video of the man shouting vulgarities was posted on TikTok.

Since then, the video has been circulated on Facebook multiple times and has amassed over 167k views on TikTok.

In the video, the man's bicycle can be seen hanging precariously on the metal grab poles as he hurls curse words at other commuters on the train.

After releasing a statement about the incident on Wednesday (Dec 16), SMRT has since shared an update on Facebook earlier this afternoon.

For those of you who saw the recent video circulating online, we have an update. The uncooperative male commuter who...

According to the post, the uncooperative male commuter who brought a non-foldable bicycle into the train is being investigated by the police.

"We thank the police for their swift action in helping to keep the public transport network safe. We would like to remind all commuters to do their part in observing the regulations," said SMRT.

"Nuisance behaviour will not be tolerated in the public transport network.

"SMRT will continue to work closely with the authorities to deal with offenders so that everyone can enjoy safe and comfortable journeys."

Related Stories
SMRT makes police report after man forced his way onto train with bicycle, hung it on grab poles
Drunk man who verbally abused MRT staff, dared them to call police and refused to wear mask arrested in Yishun
Man hurls vulgarities at MRT staff, challenges them to call police: 'Why must I go out? I pay money leh'
More About:
SMRT
aggressive
rude
train
MRT