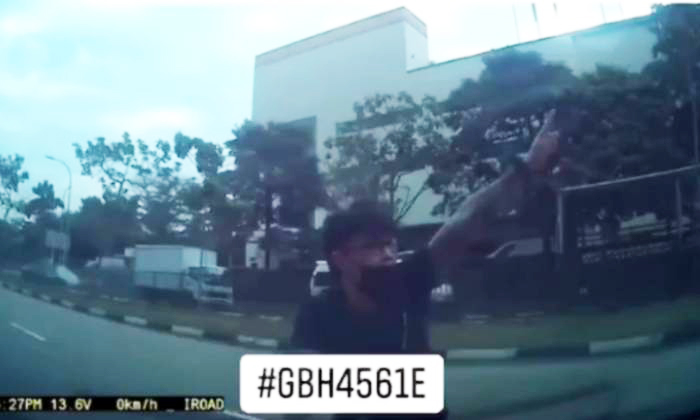 A man was caught on video slamming on the bonnet of a Grab deliveryman's car repeatedly along Tampines North Drive 1 on August 11 at 5.05pm.

Stomper Anonymous, who was the man hitting the car, shared the incident to Stomp and sent a video of what happened.

The video had also been posted on SG Road Vigilante's YouTube page on Saturday (Oct 17).

In the video, a man can be seen hitting on the car bonnet as the car slowly moves forward.

Photos of a police report made by the Grab deliveryman can also be seen attached at the end of the video.

The YouTube video was also posted on the SG Road Vigilante Facebook page, along with the caption: "Grab driver was confronted by employees of a courier company after deciding to cancel the Grab delivery job."

In the comments, netizens were quick to say that it was impulsive and dangerous of the man to slam on the car bonnet.

Other netizens speculated that there must be two sides to the story, which is what made the Stomper come forward to share his side of the story.

However, the Stomper said that his courier company needed to locate the parcel and required a self-collection code, which the Grab deliveryman could not provide.

"After the Grab deliveryman waited for about 15 minutes, he started to get angry," said the Stomper.

"When my boss asked him what the issue was, the deliveryman started shouting vulgarities at him.

"I was not at the office at that time, so my boss called me and asked me to return to the office.

"My boss had also called the police by then.

"When I was in my van and just about to turn into the office, I noticed that the Grab deliveryman was in his car and about to leave.

"So I drove in front of his car to try to stop him from leaving. But that did not work as he just changed lanes.

"So I got out of my van and started banging on his car bonnet so stop him from leaving."

In response to a Stomp query, the police have confirmed that a report was lodged.