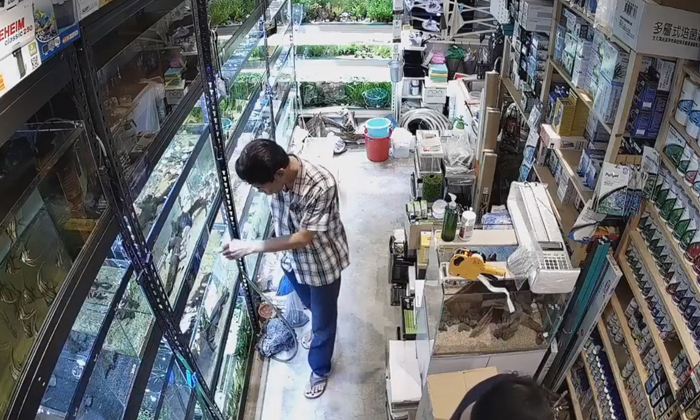 The police are investigating an incident of a man allegedly poisoning a tank of fish at an aquarium in Boon Keng last Tuesday (June 11), they told Stomp in response to queries.

Glassbox Aquarium is currently appealing for any information about the incident that occurred.

In the video posted on Glassbox Aquarium's Facebook page, a man in brown and white plaid short-sleeved top can be seen looking at the tanks in an aquarium.

He gradually moves towards the camera while he looks at the tanks.

From the video, the man is seen holding a packet containing a white substance.

He then throws the white substance into one of the tanks and moves towards another display.

As a couple of seconds go by in the video, the water in the tank looks to be turning cloudier.

The man looks to be perusing the other displays but turns back to check the affected tank before leaving the view of the camera.

The owner of Glassbox Aquarium, Mr Ng Yim Hick, told The New Paper that he quickly drained the tank when a customer had alerted him about how there was something wrong with the water in it.

The water in the tank had started to take on a milky white colour and gave off a pungent smell.

By then, only two fish managed to survive.

According to Lianhe Zaobao, 55 fish died in just five minutes.

He told Zaobao: "My heart ached when I saw the fishes struggling in the water. If there was anything he's dissatisfied with, he could've mentioned it. He didn't have to do such a thing."

The tank had contained high-value fish.

Ng estimated that he sustained a loss of between $400 and $500 due to the incident.

Ng said: "We're just a small business and it's very sad that someone would want to attack us like that. We're just afraid he will come back and do something like this again because what he did really had an impact on our business."

The police said in a statement to Stomp: "The police confirmed a report was lodged and investigations are ongoing."