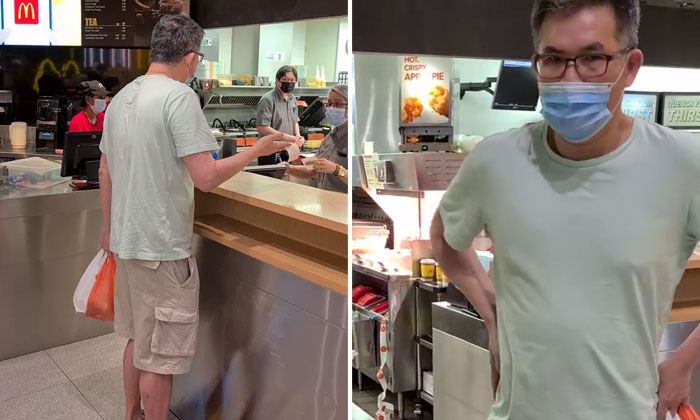 The police are investigating an incident where a customer was caught on video shouting at and using vulgarities on staff at a McDonald's outlet at Punggol Oasis on July 24.

Several Stompers alerted Stomp to footage of the incident that has been circulating on social media.

In the video, the man is heard yelling, "Enough!" and demanding a refund.

The restaurant manager asks him for his name and says that she is going to call the police.

The man then challenges her to do it "right now".

However, he refuses to give his name or number despite her repeatedly asking.

She tells him: "Every time you come in, you are like this."

He replies: "Every time, your f-man, every time."

The police told Stomp they were alerted to a case of intentional harassment at 681 Punggol Drive on July 24 at 1.55pm.

When contacted by Stomp, a McDonald's spokesman said they are aware of the incident.

"Our restaurant manager attempted to manage the situation calmly, and had called the police to assist in resolving the dispute, the spokesman said.

"However, the customer had left the restaurant before the police arrived.

"More importantly, while our employees strive to do their best every day to serve our customers with care, we also hope that any unintended misunderstandings can be resolved amicably.

We believe that under any circumstances, our employees – just like any human being – should be treated with graciousness and respect, and do not deserve to be shouted at in the manner as portrayed in the video.

"We ask for everyone to show a bit more compassion to all service staff across industries who are doing their best every day, especially during these challenging pandemic times."