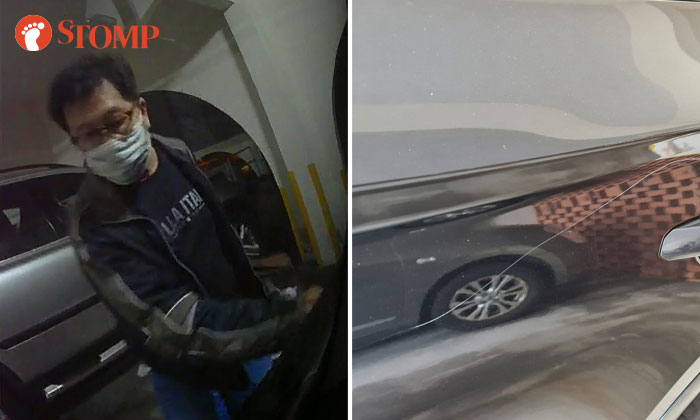 The police are investigating an incident where a man was caught on video scratching a car parked at a condominium in Braddell on Jan 10 at about 7.15pm.

The owner of the damaged car shared with Stomp footage of the incident that happened at Block 10N, Braddell View condominium.

The Stomper said the man was most probably unhappy with him for parking in his "favourite" lot when he decided to scratch it.

In the video, the man is seen approaching the car with what appears to be a key in his hand and drags it along the side of the car.

The grating sound of metal on metal is heard.

"I feel that it is unbelievable that in Singapore's context, with so many educated individuals, we still have such uncivilised people among us," said the Stomper.

"They cannot accept that in a private condominium, parking is first come first serve.

"Just because they have stayed here longer than I have, the lot is 'entitled' and 'designated' for them."

He added that he made a police report after the incident.

Related Stories
Man finds deep scratches on his car after hit-and-run at National Library carpark
Man allegedly scratches car that was parked 'too close' to his vehicle at Choa Chu Kang carpark
Woman looking for culprit who scratched her car at Junction 8 carpark
More About:
scratch car
vandalism
caught in the act
caught on camera