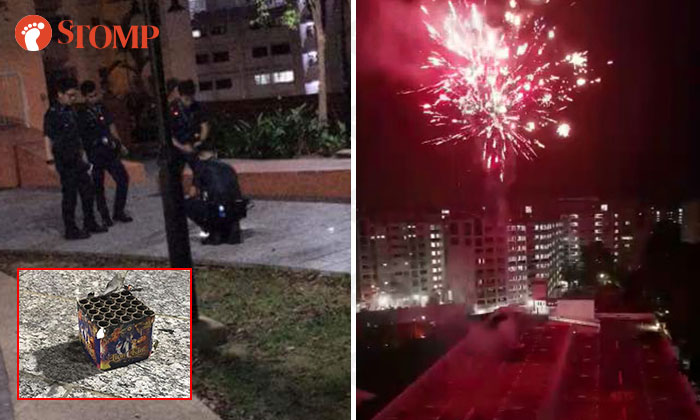 Residents have reported separate sightings of fireworks in Yishun and Ang Mo Kio on Deepavali (Oct 18).

At about 12am on Wednesday, Stomper Kyocheong was shocked to see fireworks going off at Yishun Ring Road.

This was reported in a Stomp article on Oct 18.

Kyocheong sent a video of the visual spectacle to Stomp, adding that she was unsure who had set off the fireworks.

In the second incident which happened on the same day, Stomper Ning was awoken by the sound of fireworks going off at about 10.27pm at Teck Ghee Vista in Ang Mo Kio Avenue 1.

Said Ning: "My windows were not directly facing the fireworks, but I caught a glimpse of the bursts of light.

“It was so loud and went on for about a minute. At first, I thought it was an explosion."

According to Ning, several other alarmed neighbours also shared their experience on a Facebook group.

In response to a Stomp query on the Yishun case, a Police spokesman said:

"The Police confirmed a report was lodged and are looking into the matter."

In response to a Stomp query about the incident at Ang Mo Kio, a police spokesman said: "On Oct 18, 2017, at 10.27pm, the police were alerted to a case of discharge of fireworks at Block 307C Ang Mo Kio Avenue 1.

The spokesman also added: "The police would like to remind the public that anyone caught discharging fireworks may be prosecuted in court for an offence of discharge of dangerous fireworks under Section 3(1b) Chapter 72.

"If convicted, the offender will be liable to a fine of not less than $2,000 and not more than $10,000, or to imprisonment for a term not exceeding two years or both."