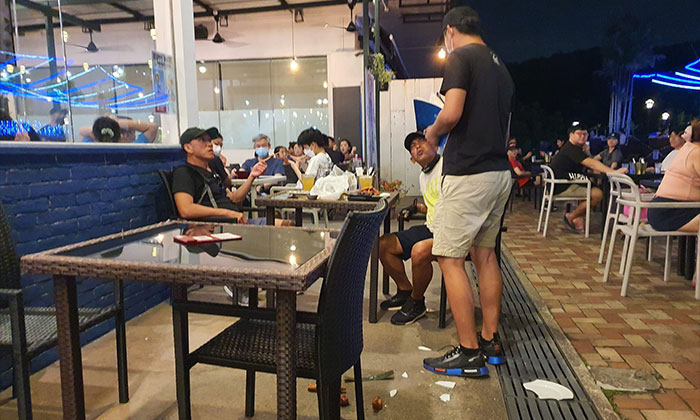 Two men, aged 55 and 59, are being investigated for public nuisance after they allegedly threatened staff and smashed a plate at Fat Po restaurant in Punggol on Saturday (Mar 12).

The police said in a statement they received a call for assistance on Saturday at about 8.25pm at a food establishment along Tebing Lane.

"Two men were allegedly seen behaving in an unruly manner towards several service staff and had purportedly thrown a plate onto the floor before leaving the premises," the police said.

She said she saw the two men helping themselves to a table without queueing up like other patrons.

One of the men allegedly lit up a cigarette and was told by staff that smoking was not allowed on the premises.

"After much persuasion from the staff (I have to say the manager is really damn patient), he finally stood out to smoke," wrote Carol.

However, the man then came back with a bag full of satay from another eatery.

When he was told by the staff that outside food was not allowed, he allegedly raised his voice and told them they were very hungry.

Despite being told they cannot eat the satay at Fat Po, the men were photographed doing just that.

They then accused one of the waiters of having a bad attitude before one of them allegedly took a plate and smashed it onto the floor.

The other man was then seen shoving another female staffer while she was clearing the food and broken dinnerware.

When the manager told them they will not be charged, they walked off but not before allegedly threatening to "bash up" another staffer.

Carol said another patron named Justin shouted at the men to stop harassing the restaurant's staff and subsequently called the police.

Everyone, these 2 cyclist created trouble @Fat Po. They ordered no food, sat on the outdoor table & proceeded to smoke....

Fat Po addressed the incident on Facebook, thanking their customers for standing up for their staff.

The eatery wrote: "You can break our plates but you will not break our spirits!"

It added that its management will not condone any act of aggression and abuse towards our staff.

You can break our plates but you will not break our spirits! Thank you to the customers and public for standing up for...

Officers established the identities of the two men and police investigations are ongoing.

The offence of public nuisance carries a jail term of up to three months, a fine of up to $2,000, or both.

"The police take a serious view of such acts and offender will be dealt with in accordance with the law," the police said.