Police investigating: 2 drivers get into a brawl in Geylang, blocking traffic 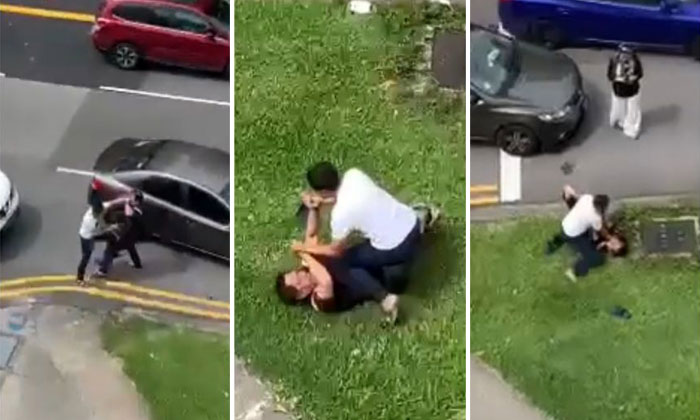 In response to queries from The Straits Times, the police confirmed a report was lodged and investigations are ongoing, but did not elaborate further.

ST understands that the incident took place at 1pm at the junction of Sims Avenue and Lorong 39 Geylang.

In a video circulating on social media, two men - one in a white T-shirt and another wearing a black T-shirt- can be seen shoving each other violently after disembarking from their respective cars.

They then wrestle on a patch of grass by the roadside.

During the fight, which lasted two minutes, both their cars can be seen in the video remaining parked by the road, disrupting the flow of traffic.

A woman then emerges from the passenger side of one of the cars and tries to stop the fight.

Eventually, three onlookers come to her assistance and one of them helps to separate the two men.

At the end of the fight, throughout which shouts can be heard, the two men return to their cars without further interaction.

It is not known if any injuries arising from the fight were reported. The Singapore Civil Defence Force told ST that it did not receive any calls for assistance at that location.

On June 13, three men, aged between 37 and 50, were arrested over a fight that broke out in Geylang.

The fight took place in Lorong 10 Geylang past midnight.