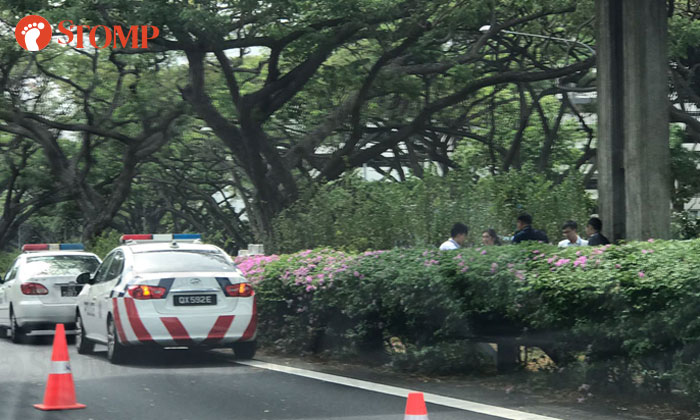 A man was taken to hospital after allegedly jumping from an overhead bridge on the East Coast Parkway (ECP) today (Feb 27).

Stomper Eddie and Adrian alerted Stomp to the incident after receiving photos from the scene that were circulating on WhatsApp.

The incident happened near the Marine Terrace exit.

A police spokesman told Stomp that they were alerted to a case of attempted suicide along the ECP near Block 6 Marine Terrace at 2.30pm today.

"A 46-year-old man was conscious when conveyed to Changi General Hospital," he said.

In response to a Stomp media query, a Singapore Civil Defence Force (SCDF) spokesman said that they received a call for ambulance assistance at about 2.35pm.

"A man was conveyed to Changi General Hospital (CGH) by an SCDF ambulance," he said.

"The hospital was alerted to be on standby to receive him."

Related Stories
Hide-and-seek game turns tragic as boy falls to his death from sky garden of Toa Payoh HDB block
NUS student who fell to death did not have a "daredevil streak", says BF
Wheelchair user falls to death during escape attempt after getting locked in Eunos flat by drug offender
More About:
fall
bridge
ECP
expressway
attempted suicide