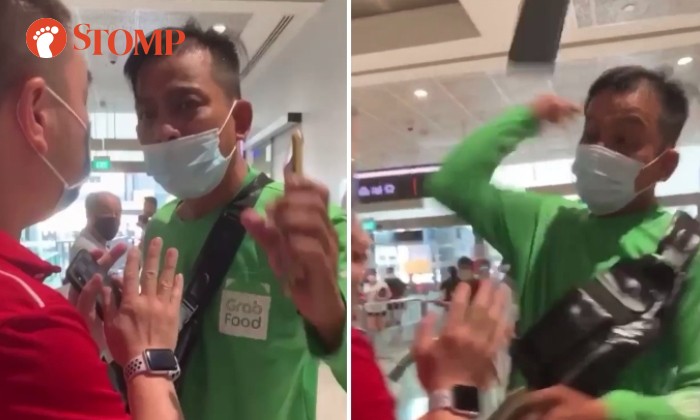 The police are investigating an incident where a GrabFood deliveryman was caught on video shouting vulgarities and flinging a phone out of a man's hand at AMK Hub.

Several Stompers alerted Stomp to a video of the dispute that was posted on Facebook on Sunday (Oct 18).

In the video, a man in a red shirt can be heard telling a GrabFood deliveryman: "No need to point fingers okay? I am just asking you to chill."

The GrabFood deliveryman then flings the man's phone out of his hands. He is then seen walking into a lift while shouting some words in dialect.

According to Chinese-language newspaper Lianhe Zaobao, the GrabFood deliveryman is believed to have cut into the man's queue to enter the mall in Ang Mo Kio, thus leading to the altercation.

Lianhe Zaobao reported that when the man told the deliveryman to queue up, the latter got angry and flung the man's phone.

The video was originally posted on a Facebook group by Moon Nguyen, who wrote about her husband's encounter with the GrabFood deliveryman. 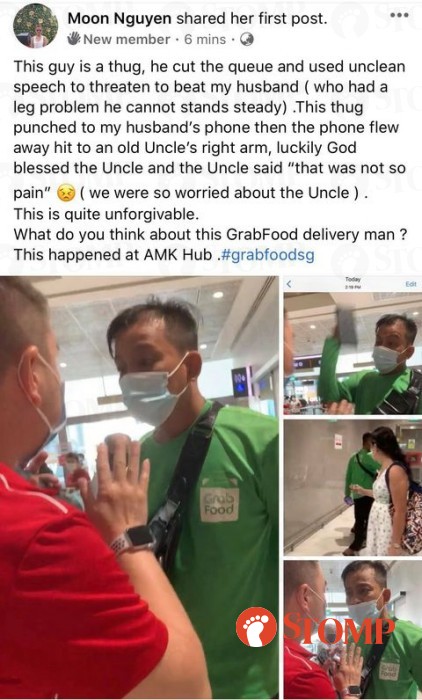 In response to a Stomp query, a spokesman for Grab said: "Grab is aware of this incident and is looking into it."

The police also confirmed that a report was lodged and investigations are ongoing.

Related Stories
GrabFood apologises for failing to deliver Mother's Day orders, even those made in advance
FB post about GrabFood rider 'fined $300 for wearing cloth as mask' is fake, he was asking police for help over theft
Man waits 1 hour in vain after GrabFood order gets cancelled twice, left with no dinner and family outing
More About:
grab
dispute
Ang Mo Kio
rider
GrabFood