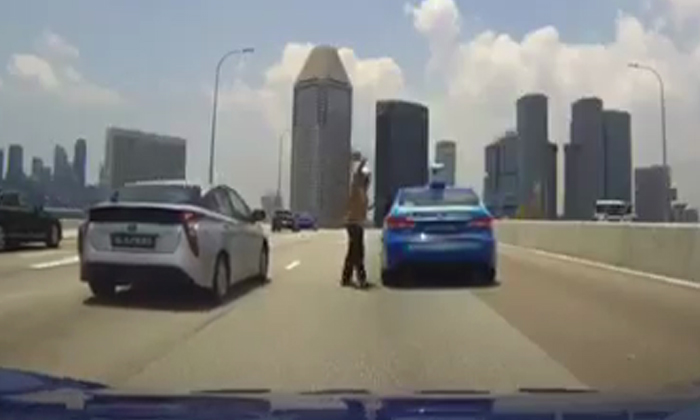 The passenger has given his side of the story.

Read the full update here: Passenger alighted from moving taxi on ECP as he 'was more afraid of being in the cab'

The taxi driver had blacked out momentarily, said ComfortDelGro in an updated statement.

Read the full update here: Cabby who hit road divider and caused man to alight on ECP had blacked out: ComfortDelGro

The police and transport operator ComfortDelGro are investigating an incident where a taxi driver was seen hitting a road divider twice, before letting a passenger alight on the East Coast Parkway (ECP).

Facebook user Daryl Goh posted a video of the "weird incident", which occurred on the Benjamin Sheares Bridge on Friday afternoon (March 8).

In the video that was also shared on ROADS.sg, the ComfortDelGro taxi driver is first seen hitting the central road divider.

A voice in the background, believed to be from the driver who recorded the video, can be heard asking: "What he doing? He bang the wall ah?"

The cabby then hits the road divider again.

The cabby soon slows down in the middle of two lanes on the expressway, still on the move as a male passenger alights from the taxi.

As the passenger walks to the side of the road, the taxi starts to pick up speed again but appears to hit another car.

The taxi continues on its way while the passenger is picked up by a red car.

When contacted by Stomp, a ComfortDelGro spokesman said it is investigating the incident.

Related Stories
Cabby who hit road divider and caused man to alight on ECP had blacked out: ComfortDelGro
Passenger alighted from moving taxi on ECP as he 'was more afraid of being in the cab'
More About:
cabby
taxi
reckless driver
reckless driving
ComfortDelgro