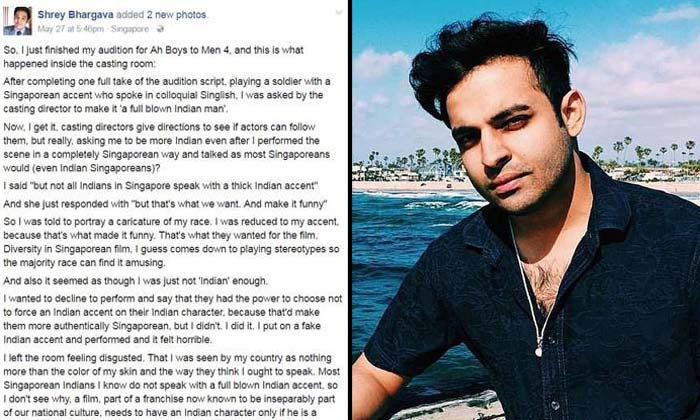 The police said that a Singapore actor who alleged racism during an audition for the movie Ah Boys To Men 4 was called in for questioning, but have closed the case as "no criminal offence" was found.

A police report had been made against the actor, Mr Shrey Bhargava, and he was subsequently called in for questioning on Wednesday (May 31).

In response to Stomp's queries, the police confirmed that a report was lodged.

"After looking into the matter, it has been assessed that (there was) no criminal offence," said the police spokesman. "(The) police will not be conducting further investigations."

The issue started when the 22-year-old wrote on Facebook that he felt insulted after he was allegedly asked to portray "a full-blown Indian man" with a thick accent.

He added that he was told to "make it funny" during the audition for the military-themed Jack Neo film.

The post was shared widely and sparked a debate about "casual racism" in Singapore.

Some sided with him, saying that it is an issue they have faced as well.

Xiaxue felt that Mr Shrey was playing the victim card, while Maxi felt that it was inappropriate to take this issue online.

The internet still remains largely divided on this issue.