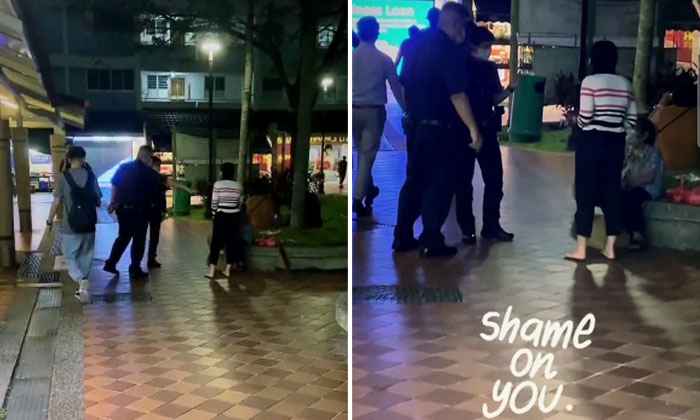 The police have clarified an incident where police officers were accused of 'bullying' an elderly lady in Yishun for not wearing a mask.

In a statement on Wednesday (May 19), the police said they were aware of various posts circulating online alleging police bullying in relation to an incident that they responded to at Block 743 Yishun Avenue 5 on Monday (May 17) at 6.43pm.

The posts shared on Instagram Stories alleged that four officers had "clustered an elderly auntie that took off her mask because she was feeling breathless", and had continued to "tell her off" even though the elderly woman had put her mask on and that someone had to step in to "salvage the situation".

"These allegations are not true," said the police.

"To clarify, the police had responded to the incident as an 85-year-old woman, who did not have a mask on, appeared to be lost at the said location.

"Police officers had attended to the elderly woman to help her find her way home.

"With the help of a member of the public, it was subsequently established that the elderly woman, believed to have dementia, resided in a nearby block and her domestic helper was contacted to bring her home.

"As the incident took place during dinner time, our officers were concerned that the elderly woman might be hungry and bought food for her as well."

No further police assistance was required after the elderly woman was handed over to her domestic helper safely.

The police added in their statement that they would like to commend two members of the public who had stepped forward to help the elderly woman.

"A lady offered a mask to the elderly woman," the police said.

"As the elderly woman was not able to put it on, our officer helped to put on the mask for her.

"A man also came forward and gave the elderly woman a few masks which she accepted.

"We are heartened by the kind actions of those in the community who stepped forward to offer their assistance to make our community a safe and secure place to live in."

The police advised members of the public not to participate in the spreading of unverified information or make their own conjectures on an incident and to be responsible when posting or sharing any information online.

The police take a serious view of such malicious allegations and the authorities are looking into the circulation of the falsehood.