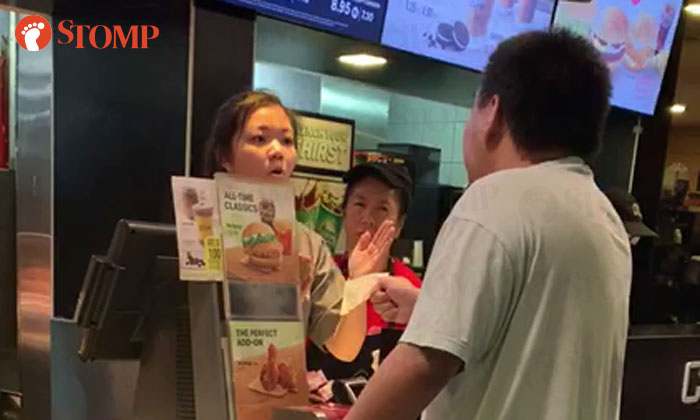 The police were called in to resolve a dispute that broke out at a McDonald's outlet at Block 684 Hougang Avenue 8 on Monday (Dec 30, 2019) at about 11pm.

Stomper Bernice alerted Stomp to the incident and shared a video he took of a customer shouting at the outlet's staff.

"The man was shouting at the female manager that he wanted to change his order," said Bernice.

"The manager tried explaining to him that he cannot change his order as the food has already been prepared.

"He kept raising his voice until another manager came out and told him to cool down."

In the video, one of the managers asks the man to wait five minutes but the man shouts back: "Wait how long?"

"My mother is hungry!"

In response to a Stomp query, a McDonald's spokesman said: "We are aware of the incident that took place Hougang Avenue 8 restaurant on Monday, 30 December, at around 11pm.

"Our restaurant managers attempted to manage the situation calmly and had the police involved to assist in resolving the dispute.

"We are in contact with the police and will cooperate with them throughout the investigation."

This is the second incident this week where a person has made a scene at a McDonald's outlet.

On Wednesday (Jan 1), a 34-year-old man was arrested for causing annoyance while drunk at a McDonald's at Pioneer Mall.

Related Stories
Drunk man arrested for causing annoyance at Pioneer Mall's McDonald's: 'Why look down on me?'
Cabby allegedly challenges man to fight after nearly hitting him and his pregnant wife at Hougang
Man punches motorcyclist in middle of the road at Novena, falls over and nearly gets hit by car
More About:
rude
shouting
dispute
McDonald's
police