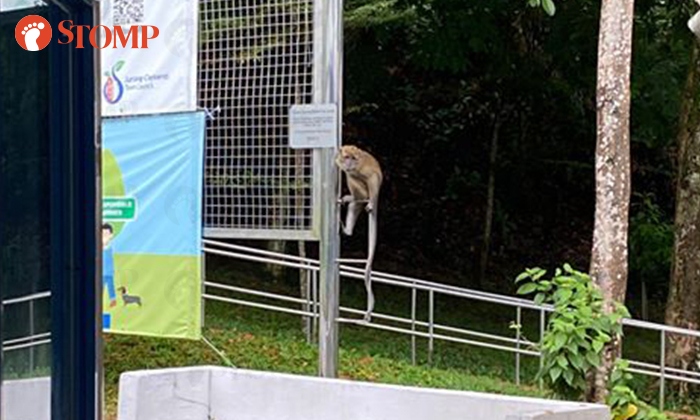 The police were alerted after a monkey was spotted at a bus stop near Block 231 Bukit Batok East Avenue 5 at about 6pm on Tuesday (Dec 10).

Stomper Sue was waiting for a bus to go to a hair salon when she noticed a few passers-by stopping and looking at something.

She contributed photos of what she saw and told Stomp: "I didn't realise that there was a monkey.

"I got to know that my bus was reaching in about one minute, so I stood up and saw the monkey near a corner of the bus stop.

"That's when I saw two police officers arriving at the scene before I boarded a bus.

"After I was done at the hair salon, I returned back to the bus stop and saw no monkey nor police officers in the area.

"I think it probably got caught or went into a forested area in the vicinity.

"I was quite shocked to see the monkey at the bus stop.

"It was so near people and I was afraid it would jump onto someone.

"What an experience it was!"

Stomp understands that the monkey didn't injure anyone and it entered a forested area nearby.

Related Stories
Cyclist greeted by monkeys on his ride home along Nicoll Drive
Monkey at Changi Airport T3: There were concerns of it venturing to runway or near planes, says Acres
Say hello to these new 'residents' at Springdale Condominium
More About:
animals
monkey
Bukit Batok