Police called in over dispute between fishmongers at Tiong Bahru Market 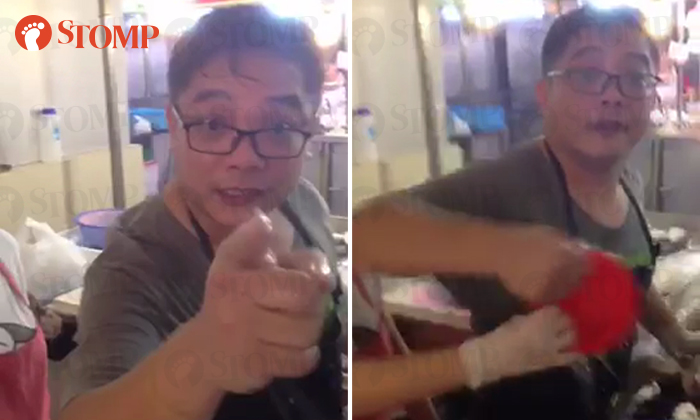 A dispute broke out between fishmongers from two neighbouring stalls at Tiong Bahru Market on Aug 26 at about 12pm.

Stomper good taste, who was one of the parties involved in the spat, alerted Stomp to the incident and shared a video that he recorded.

The video shows a man telling the Stomper, "You [agitate] my wife and still dare to complain to me?" and "You film me? This is my personal right hor?"

A woman beside the man, presumably his wife, then told Stomper good taste, "You get lost! I don't want you to stand behind my stall!"

She then used a red bowl to scoop out water from a pail, seemingly wanting to toss the water on the Stomper.

However, her husband took the bowl from her and splashed the water at the Stomper instead.

Good taste owns a fish stall next to the couple in the market.

He told Stomp in a phone interview, "The dispute with these two fishmongers started because the woman said I blocked her way.

"However, it was her who had been walking up and down my stall. It happened so many times and she was empty-handed, so I felt that she was trying to provoke me.

"The relationship between our two stalls have always been tense. I would say this is the second altercation we have had in eight years."

In response to media queries by Stomp, the police said they were alerted to a case of dispute at 30 Seng Poh Road on Aug 26 at 12.38pm.

The parties involved were advised on their legal recourse.