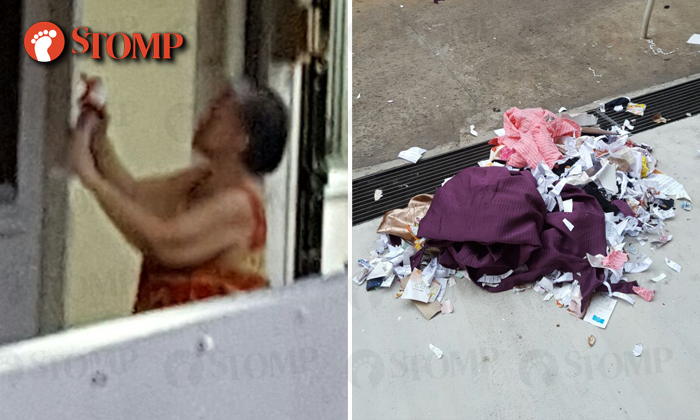 An elderly woman staying on the tenth floor of Block 113 Jalan Bukit Merah has been giving her neighbours grief by repeatedly throwing dangerous and sharp objects down the block.

She was arrested by the Police last night (Jun 2).

Stomper Anonymous said that the killer litter incidents have been going on for over two weeks.

The Stomper shared photos that she took on two different days, showing numerous litter scattered at the foot of the block.

According to her, they consist of glass and hard, metal objects "that might cause serious hurt to many people, especially the elderly who often walk past there", which is why neighbours are concerned.

Other pictures that Anonymous took show police officers at the scene both in the day and at night. Police had also cordoned off an area affected by the litter.

"For about two weeks plus, she has been throwing things from her home, both from the main front entrance to the back of the utility room and the bedroom.

"Rubbish fell all over the ground floor landing on the first floor and on the corridors of each floor.

"Many residents and neighbours have lodged complaints to the National Environment Agency, Tanjong Pagar Town Council and to the Singapore Police Force.

"They have all visited about twice. Each time whenever they come, she refuses to open the door so they can't do anything and leave.

"Two days ago, she even threw a packet of solid glass, as well as a packet of clay pots and full of other things down, that landed in front of the block.

"Managed to shoot a video of her last night when she happened to come out of the house."

Anonymous added that the last police report was made last night (Jun 2).

In response to media queries, a Police spokesperson told Stomp that they were alerted to a case of killer litter at the aforementioned location at around 7.44pm.

A 71-year-old woman was subsequently arrested for rash act.