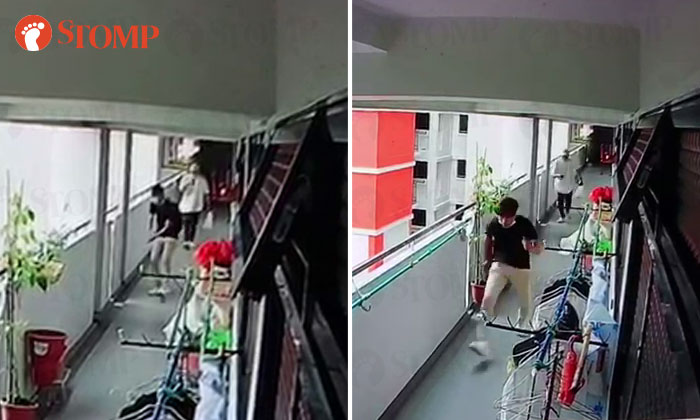 A resident experienced a shock when two youths ran past their Choa Chu Kang HDB unit while pretending to hold guns and screaming.

Stomper Madam Soh shared with Stomp footage of the duo taken from her CCTV camera on July 23 at around 4.04pm.

"I had two idiots who pretended to hold guns along my corridor and then screamed into my unit as my main door was open," she said.

"By the time I looked out the window, they ran away giggling."

She added that her mother was not at home at the time of the incident but worried about what might have happened if she was: "If my mum had a heart attack, are they going to be responsible?"

Madam Soh said the two men were in their early 20s and acted like this despite there being two CCTV cameras, one at her unit and one at her neighbour's unit.

"They started to act weird from the lift lobby," she said.

"The shorter one clasped his hands together to 'hold a gun' while the taller one filmed him.

"When they saw my main door was open, they literally stopped in front of my unit, screamed 'OUI' so loud that I was startled.

"I was reading a book my couch.

"I looked out my window because I heard them giggle and laugh as they ran away down the staircase.

"My neighbour on the seventh floor saw them and said they were talking and giggling and went to the lift lobby.

"It's disturbing that these young people can act out like this.

"I think we need experts to guide parents to care and guide for their young adults."

Madam Soh added that she reported the incident to the authorities, including the police.

In response to a Stomp query, the police said they received a call for assistance along Choa Chu Kang Avenue 5 at about 3.50pm.

"No injuries were reported and no further police assistance was required," a police spokesman said.