Police arrest man after he was pinned down by uncle for alleged theft: Investigations ongoing 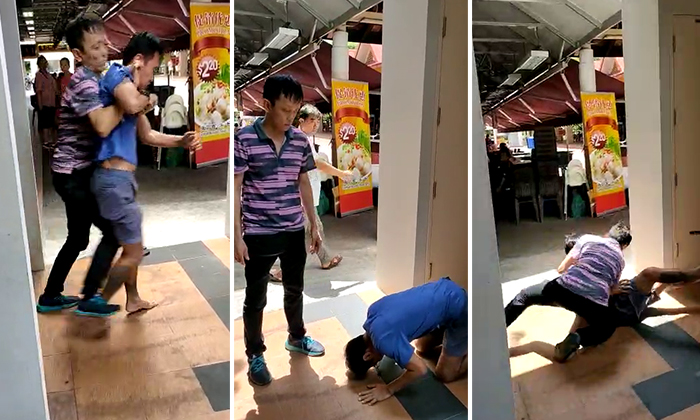 Police have arrested a 39-year-old man after he was filmed being pinned down by an uncle for alleged theft.

Stomper Don alerted Stomp to a video that has been circulating on social media.

In the video, the 39-year-old suspect in a blue shirt can be seen kneeling down and kowtowing towards an older-looking man.

The older man says in Hokkien: "Don't need to kneel, there will be no chance one. I gave you a chance already but you didn't want it."

The suspect tries to run and the older man manages to pin him onto the ground.

As the suspect tries getting up, he is pinned to the ground again. The older man asks: "You want to run ah?"

The suspect replies: "No, I'm not trying to run but can I sit up."

The man then says: "I never let anyone who steals off. Don't discuss anything with me, discuss it with the police."

The suspect subsequently tries to get up again and manages to get into a crouched position but is restrained by the older man.

Another man can be seen helping to pin the suspect against the lift.

The older man can be heard telling the suspect: "There's no chance. You're still young, I'm already over 50 years old."

A police officer arrives and places handcuffs on the suspect.

"A 39-year-old man was subsequently arrested in relation to the case.