Police apologise after officer poses next to blue death tent 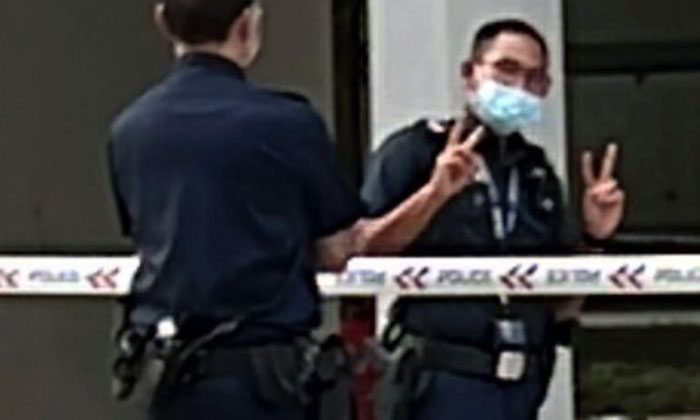 The police have responded to posts circulating online showing a police officer posing next to a blue death tent.

In a statement posted on Facebook on Wednesday (June 29) at 1.59pm, they said the post is related to a case of unnatural death that was attended by the police on June 28.

The deceased was found lying at the foot of a block.

"The police had contacted the next-of-kin of the deceased and apologised for the officer's actions," the statement said.

"While the officer was not taking a photo of himself at the scene, he had responded inappropriately to the presence of onlookers in the vicinity.

"All police officers are expected to maintain professionalism in managing incidents."

The police added they will be taking internal action against the officer.

Facebook user Tracy Lim, who claimed the person who died was her aunt, had posted the photo of the officer and said it was unacceptable and disrespectful.

In an update on Wednesday afternoon, Ms Lim said on Facebook that the police had called and apologised.

"We appreciate the fast action and assurance they will reinforce on the sensitivity when handling such cases," she said.

"We wish to rest the matter and let our family have privacy as we prepare for final arrangement of our aunt."