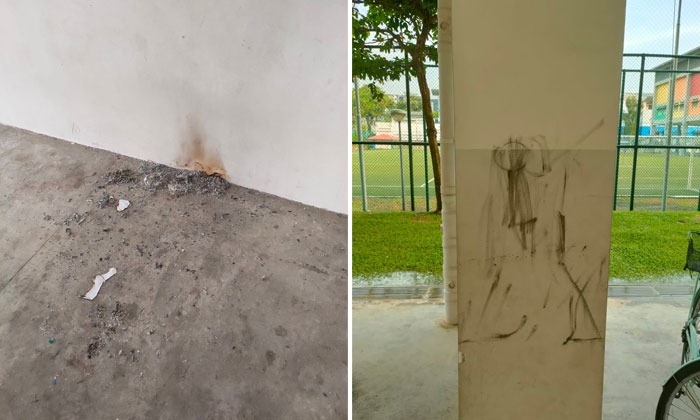 Some international students have drawn the ire of residents at Serangoon North after two separate incidents on Monday (June 13).

Facebook user Henry Ng shared in a post that a few students from the International French School (IFS) were allegedly involved in a fight at the void deck of Block 157 Serangoon North Avenue 1.

In response to a Stomp query, the police said they were alerted to a possible fight at 3.12pm.

No injuries were reported and the police are looking into the matter, a police spokesman said.

"The police are also investigating into a case of mischief and mischief by fire."

Mr Ng shared photos of burnt paper and scribbling on the walls of the void deck.

Today my malay neighbour called the police because some French students were fighting at the void deck at 157 Serangoon...

"When my daughter went down to play, she told me she saw the French student[s] burning paper at a corner [where] they usually hang out," he said.

"The poor town council cleaner [had] to come and clean the burn[t] paper and litter.

"Vandalising the void deck like their own home [sic]."

He added that this is an "everyday affair".

The Aljunied-Hougang Town Council (AHTC) said they are aware of the matter after receiving feedback from residents.

"We have since arranged to meet representatives from the International French School and the Singapore Police Force to discuss ways to address residents' concerns," an AHTC spokesman said.

In response to a Stomp query, the IFS's communications and events director Sebastien Barnard said: "Having been made aware of the allegations, the IFS Principal has initiated an investigation with the relevant student services of the school to verify and clarify the facts and take the appropriate disciplinary measures."

On May 18, students from IFS were spotted sparring at the same block in another video taken by Mr Ng.

It was not known if the boys were boxing enthusiasts and just practicing the sport.

However, the school said that they were investigating the matter and take such situations very seriously.