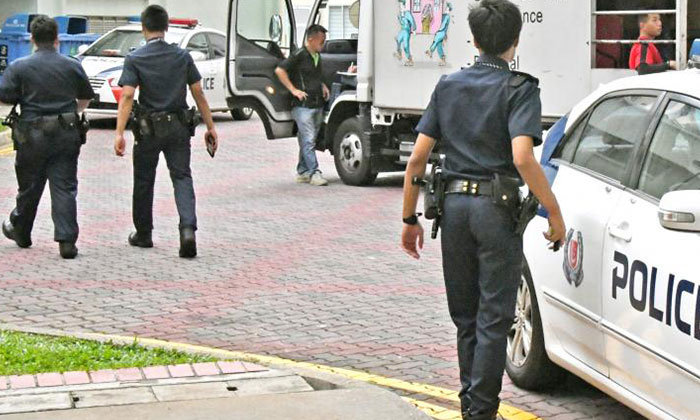 A maid, reportedly upset with her employers for confiscating her phone, took their children with her and went missing.

The incident happened at Block 827 Woodlands Street 81 on Monday (Dec 11) at around 2pm.

A reader alerted Shin Min Daily News to the anxious mother looking for her missing children at the foot of the block.

A witness, Mr Bai, 33, told reporters that he was on the way home with a friend when they spotted a woman crying, and went over to offer assistance.

“She was in distress and told us that her children went missing around noon.

“She also told us that she believed the maid took them.”

According to Mr Bai, the woman revealed that her maid had secretly retrieved the phone which they previously confiscated the day before.

When the woman discovered that her children were missing, she panicked, called the police and ran downstairs to look for witnesses, said Mr Bai.

When reporters reached the family’s unit, they found two plainclothes investigators and four uniformed officers at the scene.

At around 4pm, a man pushing a stroller brought the two children home.

It is believed that the man is one of the maid’s employers and the father of the children.

The woman declined to comment on the incident but confirmed that her kids have been safely returned.

Related Stories
Burmese maid who felt unappreciated strangles employer's daughter with pillowcase
Kind employers lend domestic helper $10k and give her two months leave so that she can finish her uni studies
Woman arrested for threatening husband with scissors -- after he lends maid toothpaste
More About:
SPF
maid
missing
children