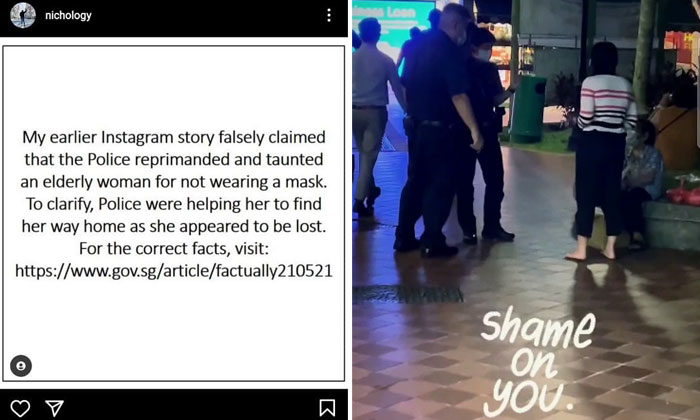 Singapore's fake news law has been invoked in response to claims circulating online that police officers had bullied and reprimanded an elderly woman for not wearing her mask.

In a statement on Friday (May 21), the Ministry of Home Affairs (MHA) said that Minister for Home Affairs K. Shanmugam has instructed the Protection from Online Falsehoods and Manipulation Act (Pofma) Office to issue the correction directions.

They were directed at Instagram user @nichology, as well as the Singapore Uncensored and The Online Citizen Asia websites.

The Instagram story by @nichology on Tuesday had alleged that police officers taunted and reprimanded the woman for not wearing a mask.

On the same day, Singapore Uncensored carried an article about the Instagram story by @nichology, while The Online Citizen Asia shared his Instagram story.

All parties will have to carry the correction notice as new posts.

The ministry said the Instagram story alleged that four police officers had clustered around an elderly woman who took off her mask because she was feeling breathless.

It also alleged that the police officers had abused their authority, and "continued to tell her off to the extent (that) someone had to come and salvage the situation".

MHA said: "These allegations are wholly false, and there is no basis for the claim that the police abused their authority."

The police refuted the allegations in a media statement on Wednesday.

The ministry said the police had responded to the incident on Monday at Block 743 Yishun Avenue 5 at around 6.45pm.

The 85-year-old woman, who was not wearing a mask, appeared to be lost and the police officers attended to her to help her find her way home.

With the help of a member of the public, it was established that the woman lived in a nearby block, and her domestic helper was contacted to take her home.

As the incident took place during dinner time, the officers bought food for the woman, MHA said.

It added: "Members of the public are advised not to participate in the spreading of unverified information and to be responsible when posting or sharing any information online."