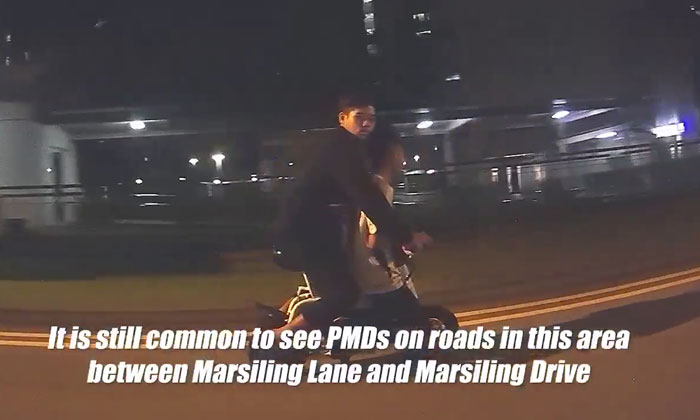 A personal mobility device (PMD) user was caught on video flouting several rules along Marsiling Drive in the early hours of Jan 4.

A Stomper alerted Stomp to the video that was posted on SG Road Vigilante's Facebook group page.

In the video, the PMD user is seen riding alongside a vehicle on the road with a pillion rider seated in front of him.

The person recording the video is heard shouting at the youths that they are not allowed to ride on the roads.

The man shouts: "This is totally illegal!"

According to the video, it is "still common" to see PMDs travelling on the roads between Marsiling Lane and Marsiling Drive

After getting shouted at, the PMD rider veers onto the pavement despite the ban on e-scooters on footpaths that officially took effect on Jan 1.

He subsequently crosses the road while the red light is showing.

Under the Active Mobility Act, PMDs are only allowed on cycling and shared paths.

The Land Transport Authority (LTA) said it has started taking "strict enforcement action" against e-scooter users who are caught riding on footpaths.

Those caught breaking the rules can be fined up to $2,000 and/or jailed for up to three months if convicted.