PMD riders travel at speeds of up to 70kmh on CTE 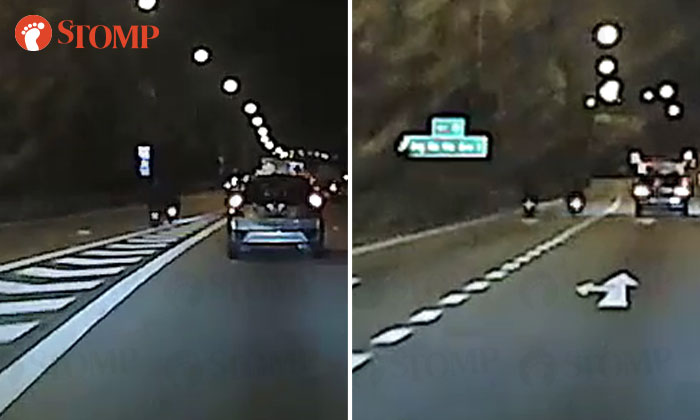 A couple of personal mobility device (PMD) riders were spotted riding along the Central Expressway (CTE) towards the city on Oct 31.

Stomper Superfly Guy alerted Stomp to the incident and shared a video taken from his in-car camera at around 10.40pm.

"Apparently there's a marked improvement in the PMD culture, now instead of hastily making their usual quick illegal trips on the roads, they've taken to commuting via the expressways as a normal means of travel," he said.

"These two fine specimens suddenly appeared on the shoulder apparently already well on their way from who knows where, at speeds upwards of almost 70kmh, they manoeuvred brazenly in and out and travelled at extensive distances onwards with main traffic.

"At one point, they manoeuvred to bypass Exit 11 AMK Ave 1 merging back into the main expressway again and were still heading towards Braddell Road exit as I continued towards the city.

"If this keeps up, we'll see droves of them going at 100kmh in the first lane in no time.

"With the impending PMD ban idea already being floated out there subject to improvements in their behaviour, I'm just one of many road users out there having to face this unnecessary daily road hazard simply because they've been allowed too much leeway for whatever reason to still exist at the perils of the public."

Under the Active Mobility Act, there is a speed limit of 10km/h for e-scooters on footpaths. They are not allowed on roads.