PMD rider who crashed into toddler assisting with investigations, still refuses to apologise to family 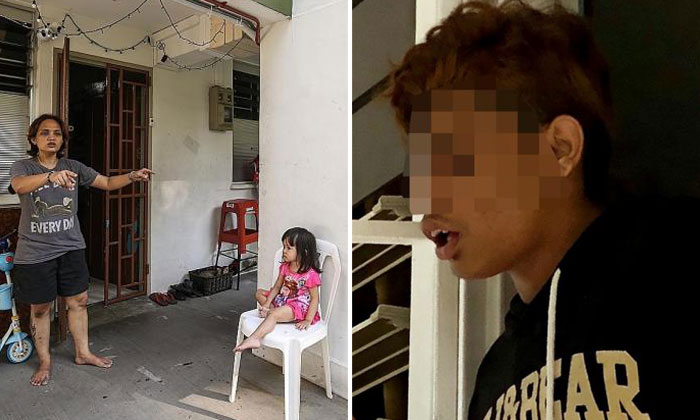 Four days after he crashed into a toddler, the 18-year-old e-scooter rider has yet to apologise to the family.

But his mother did.

"His mother came to our unit (on Wednesday night) to apologise and said she did not know what her son had done until the police told her that evening," said the toddler's mother, Madam Siti Aisah, 42.

"She also did not know where her son was because he had not returned home on Wednesday night."

The youth is now assisting with police investigations, after the toddler's father, Mr Garnell Glenn Bernard, 40, a marine supervisor, made a police report on Wednesday night.

The teen was captured on video riding an e-scooter at the void deck of Block 191 Boon Lay Drive on Sunday evening.

Footage from a surveillance camera installed outside the victim's home showed three-year-old Nur Syahirah walking past a pillar at about 8.30pm, followed by the e-scooter speeding towards her before a bang is heard.

The crash, which sent the rider flying, left the toddler traumatised and with bruises on her left thigh. The rider suffered a small cut on his right leg.

Madam Siti had previously told The New Paper neighbours had rushed out of their homes to detain the teen, who remained defiant and argued that he was allowed to ride in the void deck.

This was despite notices nearby informing residents of a ban on personal mobility devices (PMDs) at common areas in 15 HDB towns, including West Coast, where the incident happened.

A two-month grace period is in place until Oct 31 before users will be punished for flouting the ban, which carries a fine of up to $5,000.

Madam Siti said the neighbours were enraged by the teen's defiance and were about to take matters into their own hands, but she stopped them and told the teen to leave the scene for his own safety. The family initially did not want to make a police report as he was young and known to them.

Madam Siti told TNP yesterday the rider had messaged her son on social media on Wednesday afternoon to meet and "settle" the issue near the block.

But her son refused, and the rider, who lives on the fifth storey of the block, claimed he had only hit the wall and not the toddler. He also accused the housewife of lying to reporters.

Mr Bernard decided to make the report after the allegations were made against his wife.

Responding to queries from TNP, West Coast Town Council said it takes the safety of residents seriously, and that it had put up notices and issued advisories regarding the PMD ban to every unit last month.

It added that it is reviewing footage from its surveillance cameras in the vicinity and intends to identify and take action against the rider.