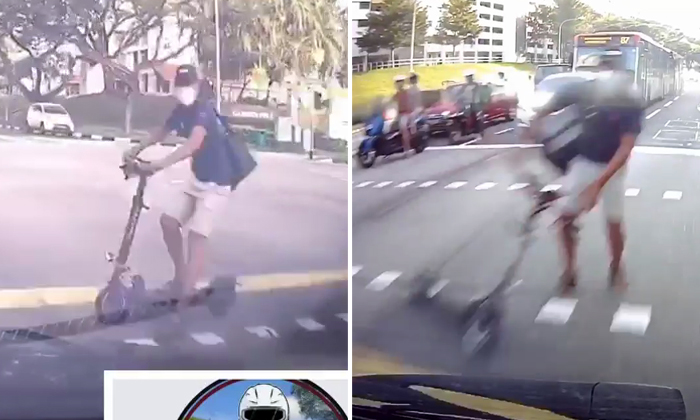 A personal mobility device (PMD) rider narrowly avoided an accident with a car after beating the red light along Bedok North Road.

Facebook page SG Road Vigilante posted a video of the incident that occurred on Sunday (Apr 12), at around 5.27pm, according to the time-stamp.

In the video, a male subject on a PMD can be seen riding across the road despite the traffic light not being in his favour.

A woman in the car can be heard screaming as she narrowly avoids hitting the PMD rider, who manages to stop in time.

The PMD rider stumbles but soon recovers himself and continues riding towards the pavement.

While many netizens slammed the PMD rider, a few felt that the car driver should have slowed down upon approaching the junction too.

A Stomper, who alerted Stomp to the video, said: "Does the PMD rider want to die?"

Related Stories
Driver knocks down PMD user who used phone while riding across road in Woodlands
Driver posts video of how 'young punks' reacted after near-accident, all 3 get slammed by netizens
Trio on e-scooter narrowly miss pedestrians and beat red light in Hougang
More About:
pmd
PMDs
near-accident
reckless