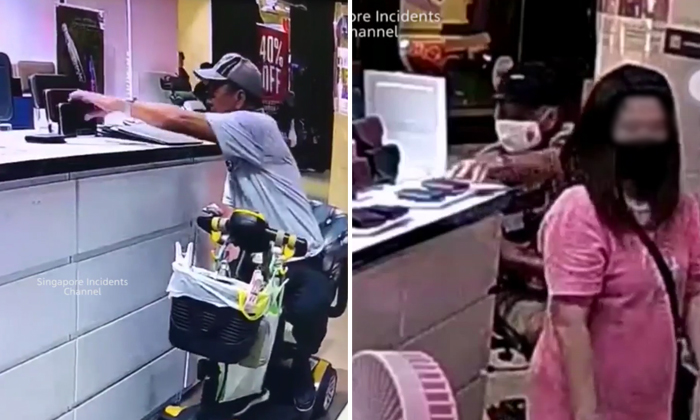 A man who stole a wallet from a store at Waterway Point one year ago has struck again, prompting staff to release CCTV footage of him in the act.

A video circulating on Facebook shows two instances of the man entering the store on his personal mobility aid (PMA) and making away with his loot.

He allegedly stole a leather wallet worth $30 on each occasion.

According to Lianhe Wanbao, the latest incident occurred on the first floor of Waterway Point shopping mall last Thursday (Jan 7), at around 2pm.

Shop owner Ms Chen said her staff had been busy with other customers at the time of the incident and did not notice the man entering the store.

The employee only realised what had happened later, after noticing that a wallet worth around $30 was missing from the shop counter and checking the CCTV footage.

Ms Chen said: "The man was easy to identify because of his PMA. He had stolen a $30 wallet one year ago, but I didn't expect him to return and steal again!"

Upset, Ms Chen uploaded the CCTV footage on social media, in hopes of identifying him.

Another employee who works at Waterway Point said that the man is a regular customer who would visit the mall twice a week, always riding his PMA and wearing a cap.

Related Stories
Customer takes stall owner's phone from table, then helps himself to cash in bucket
Man rides away with fruit seller's bike in broad daylight at Bukit Batok
Temple visitor allegedly takes $500 out of groom's wallet during his wedding
More About:
stealing
theft
pmd