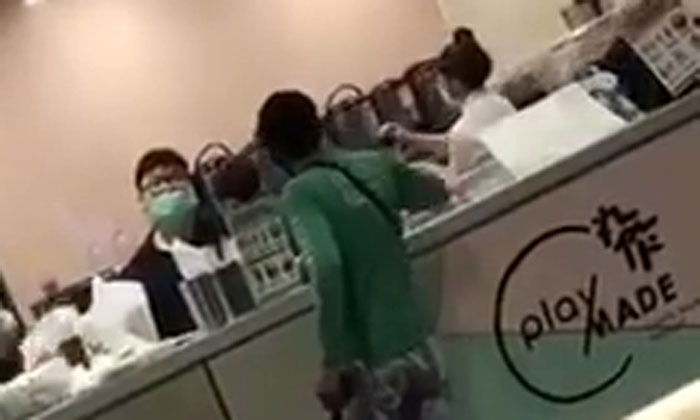 Bubble tea chain Playmade has suspended one of its employees who was involved in a heated dispute with a GrabFood rider who was subsequently arrested at Waterway Point last Tuesday (April 21).

Following the incident, Playmade apologised for the incident and said that its employee had told the deliveryman that it would be a 'f****** long wait' for his order.

Facebook user Sheikh Haikal Mattar posted a new video of the incident on Apr 24 and said: "there's always two sides to the story".

In the video, the following exchange is heard between GrabFood rider Alvin Lee and one of Playmade's employees.

Playmade staffer: "Uncle! I have already apologised to you!"

Playmade staffer: "We are working too!

Alvin: "I am also working! Then why you (mumbles) for what?"

Playmade staffer: "I'm not scared of you, I tell you!"

Another man comes forward in Alvin's defence, confronts the staff and shouts: "What's your problem!"

Sheikh also shared a response from Playmade he received saying that the employee has been suspended.

Playmade confirmed with Stomp this is true.

A spokesman said: "We can confirm that our staff has been suspended from his duties soon after the incident and before the emergence of the latest video.

"We found that his behaviour falls far short of the best levels of customer service we require of our staff.

"We have also reached out to the Grab driver, Mr Alvin Lee, to let him know we would like to assist him in his case.

"Both sides have apologized for their part in this unfortunate incident and we appreciate understanding from all parties affected by it."

Alvin, 38, has since shared his side of the story after identifying himself and admitting he was "also in the wrong" for the way he had acted in public.

The sole breadwinner for his family of four said he has no income as his delivery-partner account has been suspended by Grab while investigations are ongoing.