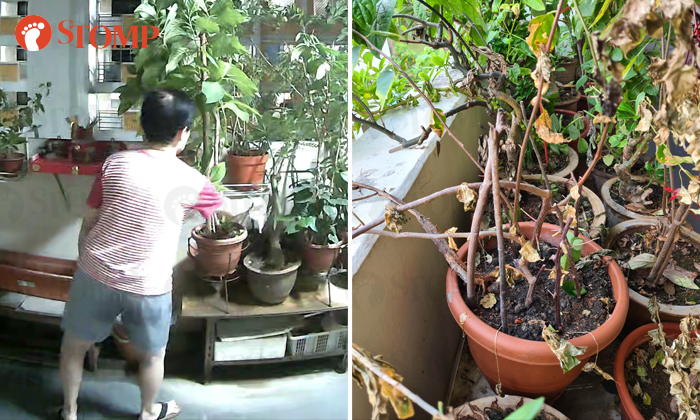 A woman was caught on camera pouring an unknown substance into a family's potted plants along the corridor at Petir Road, Bukit Panjang.

Stomper Elsie said that her neighbour has been killing her plants "since a few years ago" but there had been no concrete evidence until now. She shared CCTV footage of the woman finally caught in the act on March 30.

Elsie also alleged that this was just one in many acts of harassment that the neighbour had committed against her family.

She lamented: "My family has fallen victim to a nuisance neighbour who loves to harass us with all sorts tricks.

"This neighbour has been killing our plants secretly in the night since a few years ago, but we did not have photo/video evidence to prove it was her.

"The reason why we know that it's 100% her is because she is notorious for being a bad neighbour in our block. Several complaints against her unit have been filed over the years by different residents. Be it the unit living below her or above her, she is bound to have conflict with them.

"In September 2021, we finally broke our silence and reported these harassment issues to the Housing Development Board (HDB) and also the police for further resolution.

"All they could ask us to do is to go for Community Mediation Centre (CMC). However, CMC requires two parties to attend, so this fell through.

"In November 2021, I reported her to the police again as she hurled abusive language and verbal harassment at me when I was walking past her unit to get to the lift lobby. She was heard saying, 'I hope you get run over by a car, die die die, no parents,' when I walked past.

"At that moment, I was too shocked to do anything and just headed quickly to the lift. Up till today, the incident still causes fear in me as I would get very vigilant whenever my family and I are out of my house.

"This was again reported to the police and also to Holland-Bukit Panjang Town Council to gain approval to install a CCTV camera, so as to protect my and my family from the repeated acts of harassment, which continue to instill fear and cause distress in us.

"However, our request was rejected by HDB, who said that CCTV cameras can only be installed if we are harassed by loansharks.

"This is really ridiculous as this neighbour is literally a killer - a plant killer, but nevertheless a killer to us. How can we feel safe when we have a plant killer with supposedly acid in her hands living next to us?

"This is already going against the principles of the CDRA (Community Disputes Resolution Act). Must we wait until the acid reaches our body or face before we can do something about this nuisance neighbour?

"Nevertheless once again, no action was taken against this nuisance act." 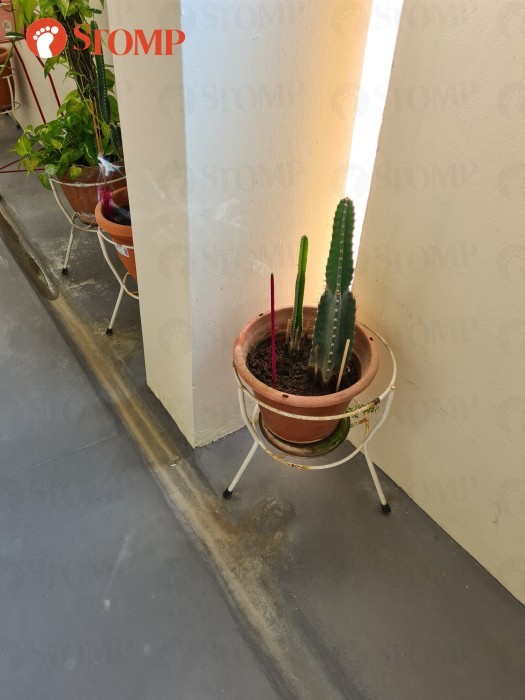 She added: "She burns a super long stick of incense repeatedly on a daily basis. The incense's smell is so awful that we have to close all of our windows and the door to avoid inhaling the nasty smell. She, on the other hand, went out after lighting the super long incense, so she is not deeply affected.

"From what I understand, this has clearly infringed the principles of CDRA which states that no one should cause unreasonable interference with his/her neighbour’s enjoyment or use of that neighbour's place of residence and, in this case, cause excessive smells.

"With this nasty smell, how are we able to enjoy the peace in our home? We don't like to stay cooped up at home with closed doors and windows. This is very suffocating, especially in Singapore with such humid and warm weather. We would normally open our door and windows to enjoy the natural breeze and sunshine that the earth has given to us."

Tensions rose again when Elsie discovered that her potted plants along the corridor were dying.

Elsie shared: "Finally, on the evening of March 31 this year, we saw that our plants had started wilting with drooping and yellowish leaves.

"This prompted us to review our doorbell camera's footage and true enough, her disgusting acts had been captured. She was seen walking quickly towards our plants along the corridor and holding a bottle of substance in her hand. She quickly splashed that bottle around our plants before making off. This is totally property damage!

"In the following few days, those plants wilted and were not their usual luscious green anymore. We called the police and also contacted Holland-Bukit Panjang Town Council to seek approval to install a CCTV camera.

"So far, the community police told us that this case is classified as an act of mischief and gave us two choices: Either CMC yet again or file a Magistrate's Complaint.

"We filed a Magistrate's Complaint on April 9 as we can no longer tolerate such nonsense acts and the case is currently pending a follow-up from the Magistrate's Court.

"The town council said that they would escalate this case to their property officer but have yet to get back to me.

"I hope that Stomp can help us to redress this injustice that needs to be heard loud and clear."