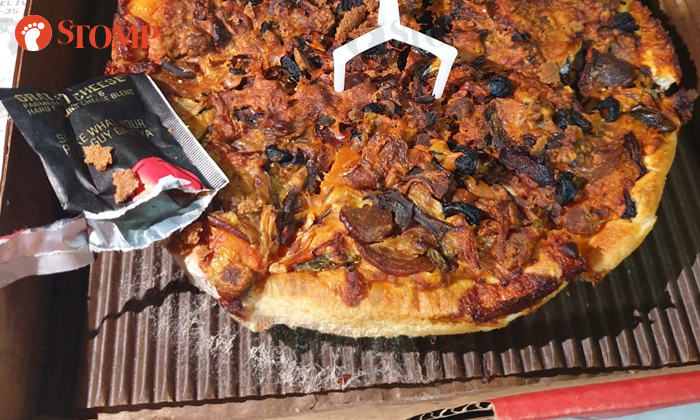 Restaurant chain Pizza Hut is investigating an incident where a customer received what looked like burnt pizza in a 'mouldy' box on Nov 24.

Stomper Shermaine said her delivery order, which cost $21.50, was supposed to consist of a Double Delight set (one regular pepperoni pizza, four drumlets and two Pepsi drinks) as well as a complimentary large Hawaiian pizza.

She told Stomp: "They sent the wrong flavour for one pizza, though everything else was right. I received another pepperoni pizza instead of a Hawaiian pizza.

"This pepperoni pizza looked like it had been there for days after having some cheese thrown over it and placed in the oven.

"Even the cheese powder was hardened and in brown chunks.

"There was even mould on the box."

A photo that Shermaine shared shows a pizza with charred toppings and white particles in the box. 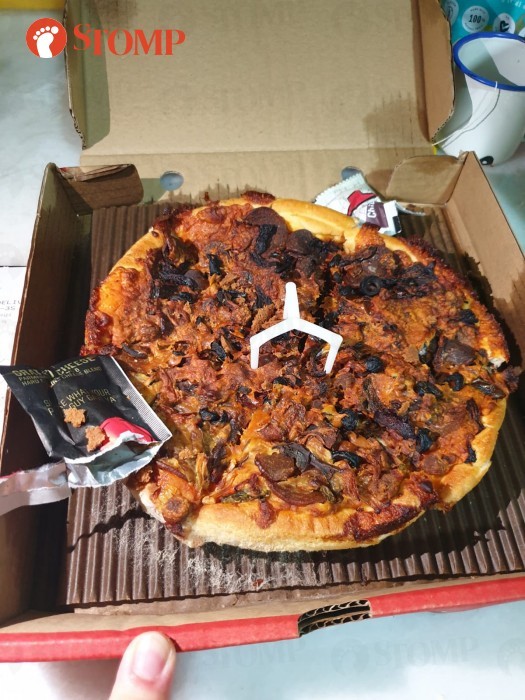 The Stomper added: "I contacted Pizza Hut to tell them about the issue and asked them to investigate what went wrong.

"In the phone call with them, they said they had checked that the pizza was freshly baked and prepared upon order. They said that this could not have happened and could not explain why I would receive such a pizza.

"During the first phone call, they said were willing to give a refund.

"In the second call, the branch manager said they would investigate. I was also offered either a complimentary pizza in my next order or two pizzas sent to me within 30 minutes.

"They also wanted to take back the affected pizza but I had already disposed of it.

"They only apologised for the inconvenience caused and not for the incident."

Shermaine, who said she is "appalled" by the pizza's appearance and its box, added: "I regret not checking the pizza when it was delivered because I did not expect something like this.

"I am sharing this to alert people to check that their orders have been delivered correctly and in good condition, and for Pizza Hut to be more stringent in their quality checks to ensure that customers receive fresh pizzas."

In response to a Stomp query, a Pizza Hut spokesman said: "All our pizzas are cooked fresh to order.

"Food health and safety are of utmost importance to us and we take all such complaints seriously."

The spokesman, who said that Pizza Hut is investigating the matter further, also added: "In the meantime, we are communicating with the customer directly on the issue."