Pizza Hut customers furious when they are left waiting hours for their Father's Day delivery orders, some don't arrive at all 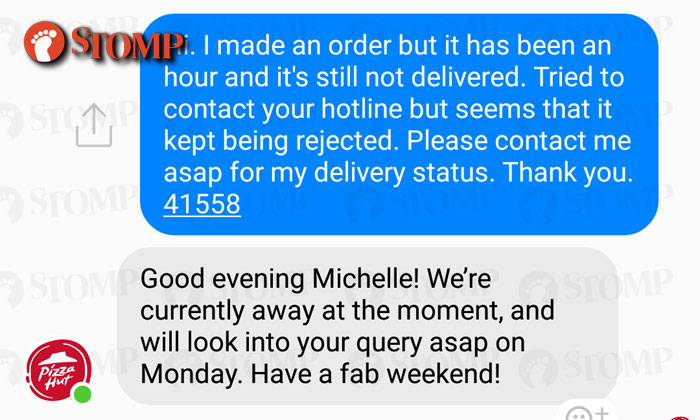 Stompers Michelle and Angeline were two of many frustrated Pizza Hut customers who were left in the lurch after placing delivery orders on Father's Day yesterday (Jun 18).

Michelle placed her order at 8.18pm when she received a confirmation that her order would arrive at 9.20pm.

At 9.40pm she tried getting in touch with Pizza Hut via Facebook messenger but she received a message telling her that they were "currently away at the moment".

She messaged again at 10pm when there was no sign of pizza and again, received no reply.

She finally received her order at 10.15pm but by then her food was cold.

"The rider came over an hour late and his explanation was overwhelming orders," said Michelle.

Angeline was not so lucky.

She received a confirmation for her order at 7.34pm telling her that the estimated time of her delivery would be 9.40pm.

By 10pm there was still no sign of her food so she tried calling their customer service and commenting on their Facebook page but she received no reply or explanation until now (Jun 19).

According to Pizza Hut's Facebook page, dozens of other customers shared the same plight.

Several commented on the eatery's page demanding to know what happened to the orders that never came.

Stomp has reached out to Pizza Hut for comment.

Check out the gallery above.

Related Stories
Food promised to be delivered by 7.30pm -- but arrives at 10.10pm, cold and smelling odd
'Desperate' texts from slimming centre's employee causes Stomper distress
Will you pay $29.90 for this pedicure at 321 Clementi?
More About:
bad service
pizza
angry
frustration
delivery
food