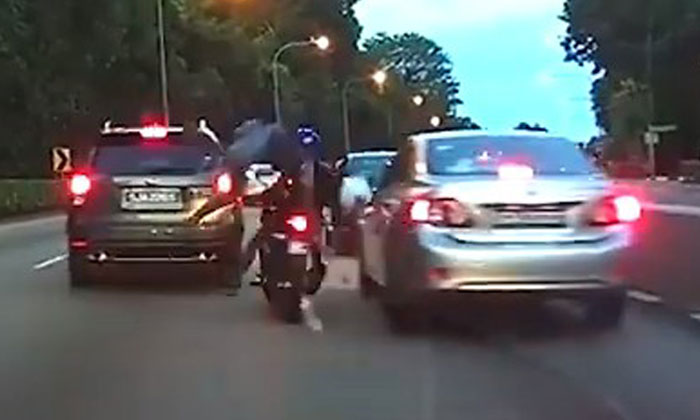 A pillion rider was thrown off after the motorcycle he was riding crashed into a car.

According to a video of what happened published on Fabrications About The PAP, the incident took place along Lornie Road on Aug 8 at around 7.03pm.

In the video, the motorcyclist ferrying the pillion rider can first be seen swerving across two lanes before attempting to squeeze through two cars.

He or she however, misjudged the manoeuvre and crashed into the rear of a car on the right.

Following the accident, the pillion rider was thrown off the vehicle.

His helmet was dislodged due to the impact, and he fell onto the road.

He was still conscious and got up thereafter, but appeared to have difficulty walking.

The pillion rider and the motorcyclist then moved to the right side of the road at the end of the footage.

"Riders, please ride defensively, it's not only your life at stake."

Related Stories
Peugeot driver crashes into biker and pillion after beating red light along Woodlands Ave 2
Biker flung off motorcycle after getting hit by car -- then bounces off another before falling onto road
Guy has not 1 but 2 female pillion riders on motorcycle -- and 1 of them isn't even wearing a helmet
More About:
accident
dangerous
reckless
motorcycle
biker